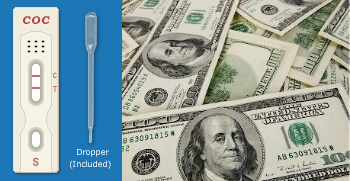 Wall Street trader Greg Calvino wrote out a $100,000 check to his girlfriend as a testament to his commitment to not straying, saying she could cash it if she ever found out he was partying with strippers. Well, one thing led to another while he was out with co-workers one night in 2005, and girlfriend Elisa Kwon cashed his check after he admitted to partying with strippers and doing cocaine, although the latter was against his will. Kwon saved a transcript of their IM conversation in which she reminded him that he had failed a $25 urinalysis test from Rite-Aid.

Calvino claims that the check was part of an extortion attempt by Kwon and that he wrote it after she allegedly threatened to go to his bosses at RBC Capital with fictional tales of drug use and hookers. The 45-year-old trader has taken his ex-girlfriend to court to get his money back with interest. He says he only wrote the check to protect his career and reputation, which might need some burnishing now that his suit has brought the matter to public attention. As for the positive drug test, Calvino blamed one of his co-workers at the time, who "put it in [his] face" while he was admittedly drunk on Jack Daniels. The trader and his girlfriend finally split up in April 2006, six months after Kwon exacted her financial pound of flesh from her wayward beau. Calvino filed his suit more than a year later in July 2007.