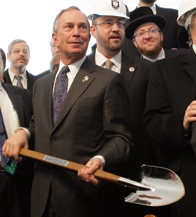 Mayor Bloomberg stood up for rich New Yorkers when he advised against the state raising income taxes on the wealthy. Why? He said, "I think at this point, where we're in competition with other cities around the world for entrepreneurs and the best and the brightest, it's not the time to be raising taxes."

Assembly Democrats suggest raising the tax rate for incomes of $1 million+, which would mean a $1.5 billion in additional revenue. And half of those $1 million+ folks are in the city. Assemblyman and congestion pricing opponent Richard Brodsky thinks the mayor is being hypocritical, "I guess the theory behind all these taxes on the middle class [like congestion pricing] is they can't afford to move to Jersey." However, Bloomberg argues that there's an difference: "the alternative is to take mass transit."

Speaking of the rich, there may be a lot less of them, since the stock market was down almost 200 points today and Bear Stearns may be going kaput.

#mayor bloomberg
#Richard Brodsky
#state budget
#taxes
Do you know the scoop? Comment below or Send us a Tip