Did you try to take a sweet Instagram of your deserted polling place this morning, only to get yelled at by some overbearing Board of Elections worker? Photographer Scott Lynch did when he tried to document his sleepytime Park Slope polling place. "I was yelled at for taking photographs, and had to assert that it was totally legal to do so," Lynch tells us. "The poll workers didn't have much emotional stake in the matter, so the situation quickly de-escalated, all while an NYPD officer looked on in silence, clearly not wanting to get involved." Lynch's experience was not unique.

The past two times I've voted in Williamsburg I've gotten into a heated argument with election coordinator Jose Feliciano, who repeatedly puts his hand in front of my lens to try to stop me from shooting. Today Feliciano and I really got into it, with him asserting that I could only take photographs if I had permission from everyone who was "in focus" in the photograph.

I told him he was grossly misinformed, and Feliciano doubled down, insisting, "You can't just photograph people without their permission." Pointing to the police officers standing nearby, he added, "It's just like how you can't take photos of police without permission." Then there was a lot of us yelling at each other, which I wish I'd had the good sense to videotape.

As we've noted before, Feliciano is wrong on both counts. New York courts have repeatedly upheld citizens' right to take photographs of police, provided the photographer is not interfering with police activity. And a Board of Elections spokesman told us this morning, "Photos are absolutely permitted" in polling places. NYC Votes is even calling for "voting selfies" (hashtag them #IVoteNYC).

And at other polling places, workers have even encouraged people to take photographs. On the Upper West side, Jen Chung says she was egged on to take this meta photo of her husband photographing his ballot: 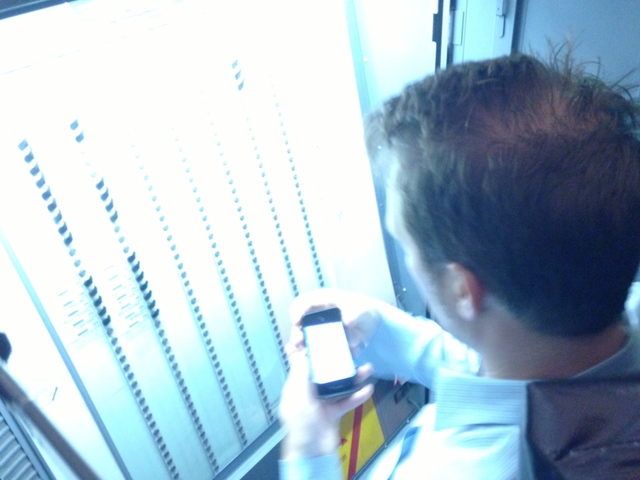 Chung says, "I had my three-year-old daughter with me, which may have charmed the bored poll workers."

#Election 2013
#rights
#voting
#original
Do you know the scoop? Comment below or Send us a Tip