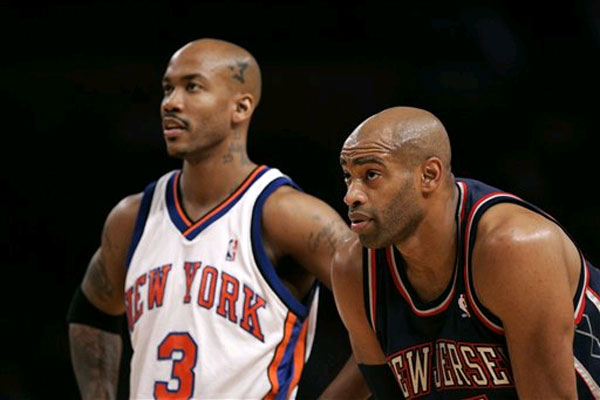 Photograph of the Knicks' Stephon Marbury (with head tattoo!) and the Nets' Vince Carter at pre-season game last week by Frank Franklin II/AP

We know the Knicks will be different, but will they be any better? Then again, how could they be any worse? The coach is new, the players are the same, but there is a different vibe to the team that ended last year at 23-59. Eddy Curry isn’t a part of the rotation and Stephon Marbury will be coming off the bench. Chris Duhon has been brought in to run the point and Jared Jeffries will be at center when he is healthy again. The new coach has brought a new attitude and a fast-paced offense to MSG and it should make for some more entertaining basketball.

What hasn’t changed is the team is still woefully bad at defense and loaded down with untradeable contracts. Marbury is still with the team and has the potential to cause huge distractions in the final year of his contract. Danilo Gallinari, the team’s number one pick, is a twenty-year old with a bad back. This team will be a lot more fun to watch and should be more competitive on the court, 30 wins or so and another trip to the lottery seem a likely finish.

Still playing in New Jersey for the foreseeable future, the Nets open the season in full rebuilding mode as well. With two-thirds of the big three gone, the question is how long before they trade Vince Carter? It probably won’t be long as the Nets are going to lose a lot of games. How many depends on how quickly Devin Harris becomes the star everyone expects him to be and whether or not Brook Lopez and Jianlian Yi can develop into productive NBA players quickly. It won’t be pretty on most nights, but the Nets are building towards the future. For now, they will battle the Knicks to stay out of the basement of the Atlantic Division.

#basketball
#brook lopez
#Danilo Gallinari
#eddy curry
#Jianlian Yi
#knicks
#nets
#sports
#stephon marbury
#Vince Carter
Do you know the scoop? Comment below or Send us a Tip
A new Gothamist is coming! We’ve moved comments over to our beta site. Click here to join the conversation and get a preview of our new website.