Don't Eff with Jerry Manuel, He Will CUT You! 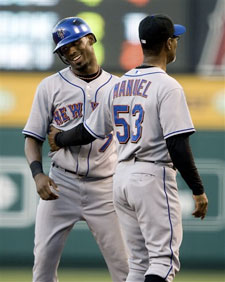 Some say that Jerry Manuel and Willie Randolph are too similar, but somehow we can't envision Randolph, the former Mets manager saying what Manuel did on Tuesday night, even jokingly. When Jose Reyes was removed from the game after he experienced tightness in his hamstring, he had a helmet throwing-hissy-fit. Reyes later apologized to Manuel, but the new manager cracked to Reyes:

"I told him next time he does that I'm going to get my blade out and cut him. I'm a gangster. You go gangster on me, I'm going to have to get you. You do that again, I'm going to cut you right on the field."

That would make for a bloody mess, Jerry! Nobody wants to see that!

Of course, the Mets internally joke about being gangster all the time, something Manuel alluded to when he was formally introduced as the interim manager on Tuesday. "That’s our in-house line. We do this all the time we say, 'Gangsters get on the field, ladies get on the bus.' Done that for a while." During Spring Training, when Manuel coached the B half of the team, he would call them "the gangters."

#baseball
#gangster
#Jerry Manuel
#jose reyes
#mets
#sports
#willie randolph
Do you know the scoop? Comment below or Send us a Tip