I was in sixth grade during the 2000 election. I watched the results with my parents. My mother cried with relief when they called Florida for Gore. "I've been so worried Bush would win, and how that would ruin your future," she said. I went to bed, and when I woke up in the morning, Florida was gone. The rest is history.

Last night I was briefly at the Javits Center for Hillary Clinton's Election Night party. I did not want to go. For a long time now, and especially for the last couple of months, I have been filled with an unending sense of dread. I was convinced Donald Trump would win, even though some people told me I was crazy. But the whole thing read like a history textbook chapter on a civilization's collapse, and the last place I wanted to be when the final vote count came in was surrounded by panicking strangers.

Indeed, dread hung over the Election Night event from the very beginning. There was no booze (God, they needed booze), and my press pass didn't get me onto the main floor, so I spent several early hours either watching CNN from the press filing room or standing by a staircase, craning my neck to see the returns broadcast on a big screen, cut off from the public. 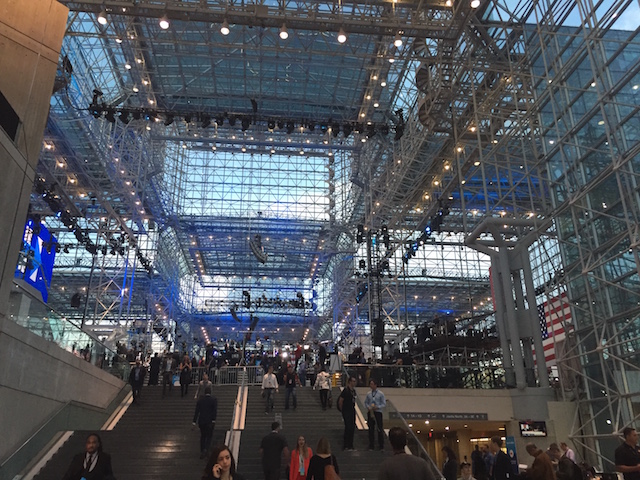 This was the closest I could get. (Rebecca Fishbein / Gothamist)

There were big cheers from the crowd when Hillary won states, but things went pear-shaped pretty quick. It started, I think, when Texas was called for Trump very early, and got much worse once it was clear Florida was in trouble. By 9 p.m., the roars from the main floor had turned sinister, and I hightailed it out of there, opting to forgo journalism for the comfort and safety of my friend's couch. I'm glad I did.

I am not surprised at last night's results, but I am angry. I am so angry. I do not know what to do with this anger. I walked around in horror on November 8th, 2000, but I know now that so much more is at stake—Bush's election brought us two wars and a recession (not to mention a terrorist attack that changed our world forever), and Trump's America is a bigger, scarier unknown.

This is horror, but there is hope. There are organizations with which we can volunteer our time and money, in hopes of protecting ourselves, in some small way, from whatever havoc Trump wreaks. Certainly, there's Planned Parenthood to consider; there's also the ACLU and the Southern Poverty Law Center, both of which help the underrepresented fight the Constitutional affronts that are certain to head our way soon. There is Make The Road New York, which works with Latino communities in all five boroughs.

There is Campaign Zero, which is dedicated to ending police violence in America. There is the Audre Lorde Project, which advocates on the part of LGBTQ people of color. There is the National Organization for Women. There is the Legal Aid Society and the National Lawyer's Guild. There is the Louisiana Bucket Brigade, which fights for environmental justice. Jezebel compiled a whole list of organizations dedicated to protecting women, immigrants, minorities, LGBTQ folk, and the earth, and I'll have a comprehensive list out in the next week.

I am not moving to Canada, not surprised by white supremacists & misogynists, and not afraid of Donald Trump. We have got to get to work.

Maybe fleeing to Canada or Germany or Fiji seems like a good call right now, but this country is still worth fighting for.

#donald trump
#election 2016
#hillary clinton
#original
Do you know the scoop? Comment below or Send us a Tip