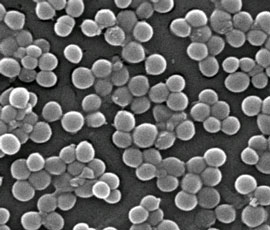 With Halloween right around the dark, dank corner, the minds of small children are populated with blood thirsty vampires, hairy knuckled werewolves, and nebulous bogeymen. But as they try to sleep and shudder with thoughts of what's hiding in their closet and lurking under their beds, real monsters are on the loose: drug-resistant bacteria! And these so-called "superbugs" - including a bacterium linked to childhood ear infections that is resistant to up to 18 antibiotics - are on the rise. Boo!

One such scary creature is MRSA, or methicillin resistant staphylococcus aureus, which infects 90,000 people a year and killed more Americans than HIV in 2005. While normally found in hospitals, MRSA has recently made the leap to the community where doctors are running out of drugs to throw at it. Another ghoul is streptococcus pneumoniae, a normally controllable microbe responsible for the common pneumonia and ear infections. Unfortunately several strains have evolved which are not hindered by a usually reliable vaccine. This s. pneumoniae strain was first reported at the Legacy Pediatrics practice in Rochester, where 11 cases have been identified to date - and two Connecticut high school students have recently been diagnosed.

As always, this surge of unrelenting germs is due to misuse of antibiotics. When a course of antibiotics medication is over-prescribed or taken incompletely, it may only kill the weakest bugs, naturally selecting for the drug-resistant, more virulent version. The CDC offers the following tips to help you avoid the things that go cough, cough in the night:

#alcohol
#As
#children
#drugs
#halloween
#health
#high school
#hiv
#people
#running
#The CDC
Do you know the scoop? Comment below or Send us a Tip