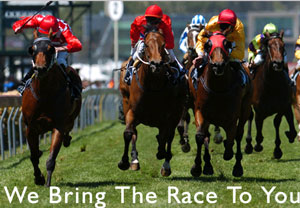 For the past few years, the officials have been warning that NYC's Off-Track Betting, or OTB, has been on the verge of going broke, whether it's former State Comptroller Alan Hevesi or City Comptroller William Thompson. OTB doesn't give the city any revenues and recently pinned its hopes on attracting more customers by making over OTB parlors and allowing bets to be placed online and by cell phone or Blackberry.

Yesterday, the Post revealed that OTB only had enough money to operate until June 30, leading Mayor Bloomberg to threaten to close down OTB, saying, "The state uses it as a cash cow and the city has been subsidizing the state and we are not going to continue to do that. I can just tell you it doesn't make any sense. One thing we could do is close down OTB...We will send them [the state] their percentage of zero."

According to the Post, using the "state-mandated formula," of the $125 million left over after operating expenses in 2007, $134 million has to go to the state, which means there's a $9 million deficit. Why so much to the state? The city says it's because the state is using the money to bail out the state racing industry and "allow the state to take credit for benefiting local horse breeders." Ouch - just as Governor Spitzer and State Majority Leader Bruno are clashing on what to do with the racing franchise!

Of course, the Mayor doesn't have all the power - it would take the Legislature to close OTB. Also, OTB provides 1,500 jobs to New Yorkers. Governor Spitzer's office says that the Governor is open to a discussion. Thompson said, "There has to be something done to stop this — [the state] just continue[s] to take a bigger and bigger bite."