Now that the investor who provided much of the money to buy 45-47 Park Place—aka the site of the controversial mosque and community center proposed for a site two blocks from Ground Zero—admitted he'd happily sell the building for whatever purpose if he made a profit, Donald Trump has offered to buy him out. But while Hisham Elzanaty mentioned $18-20 million figures (the building was bought for $4.8 million), Trump is only offering a 25% premium.

He says, "I am making this offer as a resident of New York and citizen of the United States, not because I think the location is a spectacular one (because it is not), but because it will end a very serious, inflammatory, and highly divisive situation that is destined, in my opinion, to only get worse." Hey, he isn't doing this because the new season of The Apprentice is coming up... or is he?

After the jump, check out his letter. Also, Trump has previously said, "It's very insensitive and it shouldn't be there. I'm a big believer in freedom of religion, but I think the mosque being in that location is absolutely wrong." 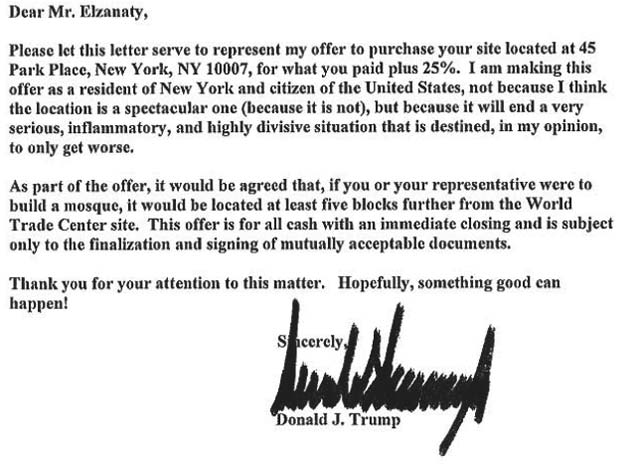 #45-47 park place
#donald trump
#ground zero
#ground zero mosque
#mosque
#park 51
#world trade center
Do you know the scoop? Comment below or Send us a Tip
A new Gothamist is coming! We’ve moved comments over to our beta site. Click here to join the conversation and get a preview of our new website.