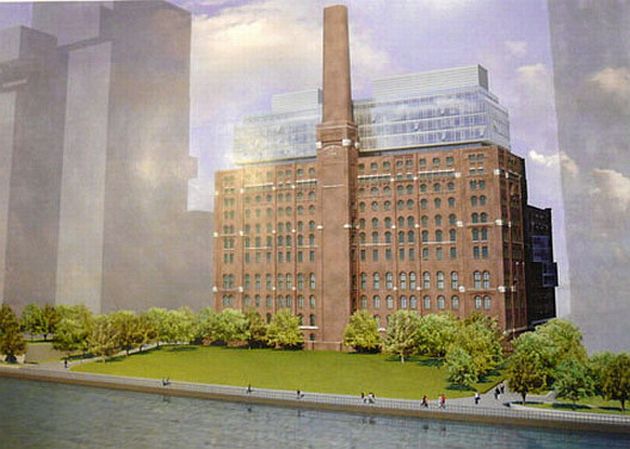 More detailed images of the proposed development at the landmarked Domino Refinery in south Williamsburg have emerged; the biggest news is that developers plan to build a five-story glass addition on top of the Filter House (above), the tallest structure at the refinery, which has been closed since 2004. According to plans revealed by architects Beyer Blinder Belle, the modified refinery would have 1,550 underground parking spaces, 30,000 square feet of retail space, an interior courtyard and “community facilities” on several floors.

The Waterfront Preservation Alliance of Greenpoint & Williamsburg [WGPA] notes that the architect's renderings do not include images of the 9 residential towers, designed by Rafael Viñoly, to be clustered around the 11.5 acre site; Brownstoner attended a community board meeting last week and walked away with the bigger picture, including detailed floor plans for the Filter House.

Photo of rendering via Brownstoner.

Some of the towers will be up to 40 stories tall, with 2,200 residential units total. As for the refinery building, because it is now a landmark, most of the proposed changes are subject to a public review at the Landmarks Preservation Commission. The public hearing is tomorrow, February 5th at 2pm at the Municipal Building (1 Centre Street), 9th Floor North. The WGPA will also be discussing the plans at their monthly meeting tonight.

Gowanus Lounge has dubbed the renderings a “Nightmare in Glass” and agrees that the buildings look like Pez dispensers; our favorite rendering is also the edible kind.

#As
#centre street
#domino
#gowanus lounge
#house
#housing
#landmark
#landmarks
#landmarks preservation commission
#Municipal Building
#new york
#refinery
#williamsburg
Do you know the scoop? Comment below or Send us a Tip
A new Gothamist is coming! We’ve moved comments over to our beta site. Click here to join the conversation and get a preview of our new website.