If you haven't been by the old Domino Sugar Refinery site in a while, you're in for a surprise. The large building to the south of the big brick colossus is gone baby gone. This photo below shows what it used to look like—the building on the right, which formerly supported the iconic Domino sign, is RIP. The brick refinery building on the left will be converted into commercial space for tech and creative companies: 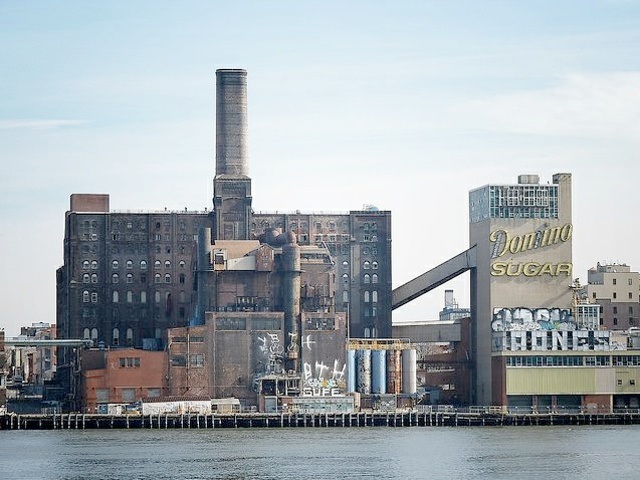 The coveted 11 acre property, which includes a vacant lot across the street between Kent and Wythe, is being transformed into a mixed-use residential, office, and retail complex by Two Trees, the company that has developed much of DUMBO. A Two Trees rep tells us that demolition is almost complete and construction of the first building, on that lot east of Kent Avenue between South 3rd and 4th, will break ground in the first quarter of 2015.

You'll recall that for the past two summers, that lot was turned into a pleasant grassy park with a dirt bike course and a teepee and garden. Two Trees says some of that will be reappear at a different location next summer. (We've heard that it will pop up across the street, closer to the river.) The Domino sign has also been preserved and will be incorporated into the new development at some point.

The first building to open will have 500 rental units, including 100 affordable units, and is expected to be completed for move-in by spring 2017. The de Blasio administration won a victory earlier this year when Two Trees agreed to comply its demands for an additional 110,000 square feet of affordable housing space—a total of 700 units—throughout the development.

Below, a rendering of what the new Domino is supposed to look like when it's complete. And check out these unauthorized photo tours of the refinery before demolition began. 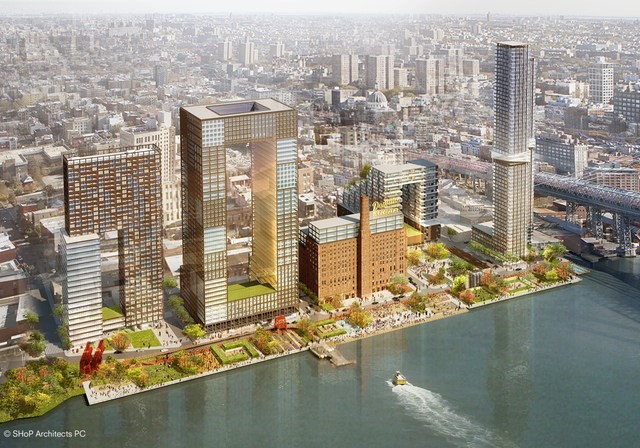 #domino
#new domino
#williamsburg
#original
Do you know the scoop? Comment below or Send us a Tip