Dollars for Diplomas Scandal at Touro 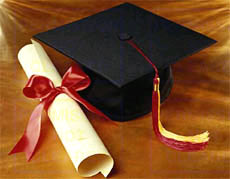 Ten people were indicted yesterday for taking part in a cash-for-grades scheme at Touro College. Manhattan DA Robert Morgenthau explained that students - and even people who never even attended the school - would pay thousands of dollars to change their transcripts or to buy diplomas. The accused include a Touro admissions administrator, a Touro computer center head, and three city teachers who "bought" master's degrees.

One concern of the Manhattan DA's office is whether any physician-assistant degrees were sold, because investigators "found blank physician's-assistant certificates" in the home of Andrique Baron, a former admissions director. Baron made $68,000, but prosecutors found two Mercedes-Benz vehicles, flat-screen TVs and other "high-end" electronics in his home. Baron's lawyer denies the charges and says, "He is an absolute scapegoat," and blames other Touro officials.

Masters of education degrees help public school teachers with their certification (and certified teachers make more). The three city teachers who bought degrees and had been teaching special education in Brooklyn and Queens public schools have been suspended. The Department of Education told the Times that two of the teachers, Renee Rene and Florence Constant, were "tenured and could not be dismissed without a hearing."