A little baby feer was rescued by Suffolk County responders after it fell 20 feet into a manhole in Mount Sinai. NBC New York reports, "Landscapers working by a vacant lot under construction by Route 25A and Nesconset Highway called police just before 4 p.m. after they noticed the fawn had fallen into the manhole."

An ESU officer "put on a brathing apparatus, and using a harness, was lowered down about 18 to 20 feet to try to save the deer. He managed to put a separate harness on the torso of the deer, which was crying but otherwise seemed fine, officials said." Sgt. Peter Reilly said, "The deer was pretty calm. We got it to walk around at some points and other times it would just sit down or lie down, but pretty calm overall." 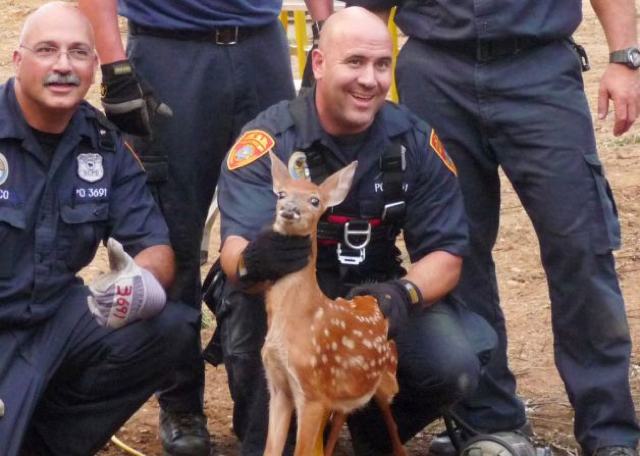 A few hours later, the rescue mission was successful and once they got to the surface, the deer was released. The fawn ran into the woods, and hopefully found Mommy or Daddy.

#baby
#deer
#DOE
#fawn
#long island
#rescue
Do you know the scoop? Comment below or Send us a Tip
A new Gothamist is coming! We’ve moved comments over to our beta site. Click here to join the conversation and get a preview of our new website.