Dogfighting Ring Broken Up in the Bronx 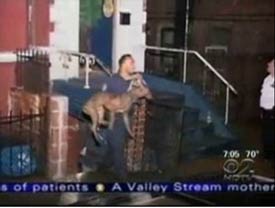 Police broke up an alleged dogfighting operation in the Tremont section of the Bronx last night, arresting seven men on charges of gambling and animal cruelty. 17 dogs were also removed from the building on 179th St. and they all showed signs of abuse. The bust comes approximately eight months after an investigation by the Humane Society of the United States (HSUS) alleged that NYC was practically the dogfighting capital of the world.

That report claimed that fight enthusiasts would even travel from other countries to bet thousands of dollars on matches between the "stars" of the underground bloodsport circuit. The HSUS eventually abandoned its effort to investigate New York dogfighting, claiming that it couldn't get enforcement cooperation from the NYPD.

Shortly after Ralph Reyes was named in the HSUS report and in the New York Post, law enforcement did go to investigate his kennel business, but it's suspected that he moved most of his fighting dogs that would incriminate him to a kennel upstate. It's unclear if last night's dogfighting bust included Reyes.

#cruelty
#dogfighting
#dogs
#humane society
#nypd
#ralph reyes
Do you know the scoop? Comment below or Send us a Tip