Dog Shocked to Death in Queens 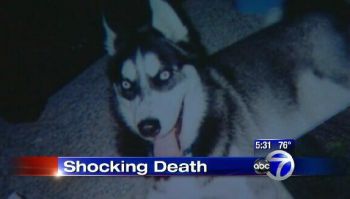 Another sad story of pet electrocution comes out of Queens; ABC reports that Cecelia Sing's Siberian husky named Sebastian died on his Sunday night walk in Long Island City. A lamppost is believed to have shocked him with stray voltage (not an unfamiliar story).

"As soon as he got to the lamppost, he jumped and he dropped," she said. "And he starting shaking wildly, and I'm like, 'Go on. Get up, Sebastian, get up,' And he wouldn't move. And he just shook. And then, all of the sudden, he stopped shaking and he was dead. My dog was dead."

While the Department of Transportation is responsible for the post itself, it's Con Ed who "handles electricity up to the post." The DoT told ABC that there was a stray voltage but "we are not able to confirm if it was ConEd or DOT." After a 2006 sidewalk electrocution, Con Ed took the blame after first pointing the finger at the DoT.

Meanwhile, Sing and her neighbors want to know how this could have happened, and they aren't getting answers out of either group just yet. In the meantime, some action was taken when the city replaced the lamppost "from base to bulb" yesterday.

#death
#department of transportation
#dog
#electrocuted
#electrocution
#lamppost
#lic
#long island city
#queens
Do you know the scoop? Comment below or Send us a Tip