Does Your Bag Need a Downsize? 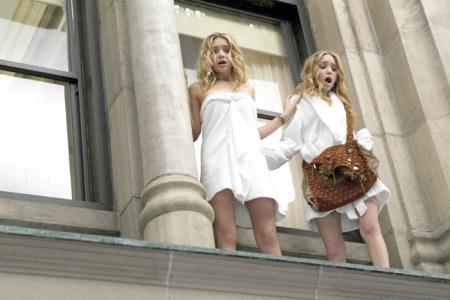 The NY Post warns the women of New York that their bag habits may be bad for them. Some women sling up to 11 lbs over their shoulder on a daily basis, and doctors warn that "Any time there's an unequal weight distribution on the shoulders or upper back, it's going to affect alignment of the spine." While we think it's more about living in New York and carrying around what you need to get you through your waking (and walking) hours -- the Post also lays blame on celebs who have made the big-bag trend popular.

Designers and fashion-forward celebrities have turned oversized totes with massive metal hardware into must-have accessories. While many start at over $1,000, they also weigh an average of 4 pounds empty.

According to their poll, the average bag weighed in at 7 lbs -- most included water, makeup, wallet, cellphone/BlackBerry, sunglasses, keys and some of the harder core handbags even toted gym clothes. Always ahead of the curve, the Harvard Crimson wrote about this very same thing two years ago.

Pint-sized celebrities and models who do cocaine on the front page of the London Daily Mirror have taken to bragging about their protruding collar bone indirectly, by sporting an extremely large bag. Seemingly, the largeness of your bag is inversely related to your smallness, thus, the greater the possibility that you could dismember yourself and stuff all of your extremities into it. The trend probably started with the Olsen twins, the originators of all things hip and extremely outsized.

Didn't that trend die earlier that year when the NY Times wrote about it? One tip to the still weighed-down women out there: "Alternate sides every other day. That will at least help balance the weight distribution." And read more about the "killer handbag" here.