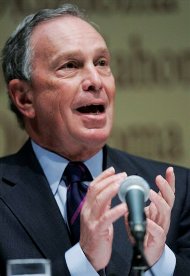 Mayor Michael Bloomberg spent yesterday in Oklahoma, discussing the state of politics today at a bipartisan political forum at the University of Oklahoma. Bloomberg lamented the way things are going these days:

Government is dysfunctional. There is no collaboration and congeniality. There is no working together. No 'let's do what's right for this country.' I think there is no accountability today. Nobody is holding themselves accountable and to the standards of what they promised when they ran for office. And I think lastly, there is no willingness to focus on big ideas."

Big ideas like a wide-ranging plan for the sustainability of New York City? However, Barack Obama's big Iowa win and encouraging New Hampshire numbers seem to "steal energy" from the event, according to the NY Times. One person organizing the DC effort to draft Bloomberg for President told the Times, "Obama is trying to reach out to independent voters, and that clearly would be the constituency that Mike Bloomberg would go after. An Obama victory does not make it impossible, but it certainly makes it more difficult.”

Mayor Bloomberg described himself as a mayor and "former businessman" - not as a presidential candidate (and didn't answer reporters' questions). Other attendees claim they didn't discuss a Bloomberg presidential run during the forum, which means they probably discussed it during breaks.

And mid-day update: The primary crowds in New Hampshire are insane.