A bill introduced in the City Council yesterday designed to license and regulate the "costumed individuals" in Times Square who pose for tips would likely force many other street performers across the city to pay a $175 fee, register with the Department of Consumer Affairs, and face fines and jail time for noncompliance, much like the street vendors who sell purses and glass pipes.

Drafted by Councilmember Andy King, Int. 467 would make it illegal "for any costumed individual while wearing a costume to solicit in return for posing for photographs or otherwise interacting with the public in public places without having first obtained a license."

A costume is defined as:

An article of clothing, accessory, mask, paint, or other object that: (1) obscures or shrouds the face of a person beyond recognition; or (2) causes a person to resemble a character rather than his or her own personal identity;

"My bill is about safety. We're setting the rules of engagement in Times Square."

But King's bill concerns any public space in the city. In addition to the Elmos and Spidermen in Times Square, Int. 467 would also apply to the living statues, the Silver Men, and just about any performer who resembles someone or something other than themselves.

"I know the legislation was drafted out of some concern for safety, but I'm very concerned with the overcriminalization of minorities and immigrants," Brooklyn Councilmember Robert Cornegy says. "This bill further criminalizes the least among us who operate on the fringes of an informal economy. I want to protect the city and our citizens, but this seems very far and overreaching."

Matthew Christian, who works for BuskNY, a street performers advocacy group, called the bill "a classic example of sweeping laws being made to address problems that do not reasonably exist."

"It is difficult for us to see a valid public interest in requiring a license for any political speech in costume in the whole city," Christian said, adding that the law was broad enough "as to require a license for trick-or-treating in Halloween anywhere in New York City." 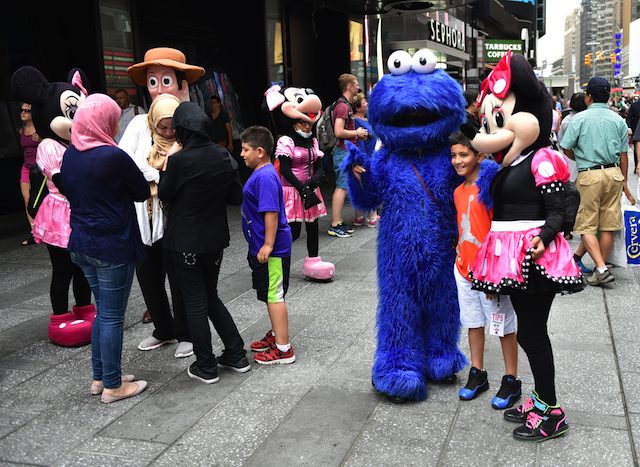 "Whether panhandling is constitutionally protected or not is a complicated question. There's been a disagreement on this subject for a long time, and the Supreme Court has never spoken out with regard to this," says Volokh, who points to two federal cases concerning New York City that might be instructive.

"One case suggests that the city's argument of hey, this is a business being carried on in a public place so we're entitled to regulation, doesn't necessarily fly," Volokh says, referring to Bery v. City of New York, in which the 2nd Circuit Court of Appeals struck down a New York City law requiring people selling painting and photographs to obtain a license.

At issue in Mastrovincenzo v. City of New York was whether the selling of shirts imprinted with a map of the Bronx was also protected speech in the same vein. "The decision in Mastrovincenzo kind of pooh-poohed Bery. It was designed to limit its scope."

While Volokh says this costume legislation is more similar to the paintings in Bery, he's not sure it's on the same legal footing.

"As a policy matter, I think it makes sense to say that subway performers keep New York fun, they are by and large poorer people, and it's good for us all if they make money this way, so we shouldn't cut into their proceeds.

"But that argument doesn't make much of a First Amendment impression. The fact that the money isn't something you have to give in exchange for a tangible item doesn't change the fact that it's pretty clearly a form of business."

Volokh says a large reason why the federal appellate court struck down the law in Bery is because there was a finite number of licenses, effectively banning that form of speech for many New Yorkers. This costume legislation only bans one type of person from this form of speech: sex offenders.

"Even though the bill is content-neutral, to these people it's a total ban on a particular speech," Volokh observes. "This law would be vulnerable on those grounds."

Councilmember Cornegy rejects the idea that these performers are running a small business, and are therefore subject to regulation.

Cornegy suggests that the fees and penalties in the bill are "exorbitant for that class of worker. Depending on how the NYPD enforces this, you could get four tickets in a week and lose your license."

Sometimes when he walks through Times Square with his children, Cornegy says he gets "pissed off at some of those Buzz Lightyears" who approach them.

"It may be annoying and irritating, but it's not illegal. For people to have the opportunity to perform in Times Square, where people go for an experience, it lends to the integrity of New York City."