Does McNamee Have A Smoking Gun? 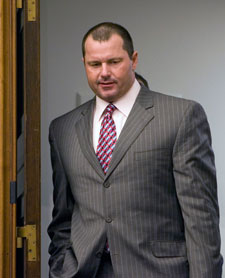 Roger Clemens went to Congress and spoke with congressional lawyers for five hours on Tuesday. While the meeting was private, Clemens did speak to reporters afterwards and reiterated his innocence saying, "It was great to be able to tell them what I've been saying all along -- that I've never used steroids or growth hormone." One of Clemens’ lawyers, Lanny Breuer added that Clemens "answered every question that was posed to him today.”

So, Clemens has now raised the stakes and will be on the hook for lying to Congress if his story is untrue. Andy Pettitte met with the same committee Monday and Brian McNamee will meet with them tomorrow and it sounds like he is bringing some evidence to back up his claims.

Wednesday afternoon the Daily News reported that McNamee has turned physical evidence over to Congress. A source says the evidence includes vials of steroids and HGH as well as used syringes and gauze pads. One of McNamee's lawyers, Richard Emery says, "We will provide Congress with corroborative physical evidence that takes this case out of the he-said, she-said purview. From our point of view, this corroborates that Brian told the truth from Day One and Clemens has not." Now this case will likely head to the crime labs to see if the syringes were used on Roger and what exactly was in them.

Congress has shown a low tolerance for lying, launching an investigation into Miguel Tejada’s testimony from 2005. Clemens, McNamee and Pettitte will all appear in front of the House Committee on Oversight and Government Reform next Wednesday.

Photo of Roger Clemens leaving the offices of the House Oversight and Government Reform Committee by AP/J. Scott Applewhite