On the same day that the City and the State announced the creation of a community advisory committee to "solicit ongoing community input" about Amazon's planned Long Island City campus, the city's Economic Development Corporation quietly released the official document that was created to successfully woo Amazon to New York.

The presentation was sensitive enough that according to documents obtained by Politico, EDC president James Katz signed a nondisclosure agreement that required the City to give Amazon prior notice in the event that the records were requested under the state's Freedom of Information Law.

Initially Mayor Bill de Blasio's press secretary told reporters that New York did not have that kind of unusual arrangement with Amazon, but he tweeted today that he was "given the wrong information" by the state.

In addition to name-checking Hamilton, the Erie Canal ("exactly the kind of innovation Amazon delivers," Governor Andrew Cuomo writes to Amazon CEO Jeff Bezos), and the High Line, the proposal notes that application developers in New York earn $51.46 an hour, ten dollars less than their counterparts in Seattle, and that our residents enjoy a "competitive cost of living," and a median rent of $1,290/month. This figure includes housing on Long Island and the Lower Hudson Valley—if these Amazon employees want to live in Queens, they can expect to pay around $2,165/month.

The state helpfully cites the economic boost it can give Amazon through tax credits for jobs and other grants (Amazon will get around $3 billion overall from the City and the State) and notes that they are "empowered to acquire, encumber and dispose of any real property interest, including through eminent domain."

Aside from Long Island City, Amazon was offered the Farley Post Office building as part of a "Midtown West" package ("Amazon could shape the four-acre rooftop into an event space, outdoor recreation area, or lifestyle amenity for employees and guests"), along with brand new office space in Hudson Yards. 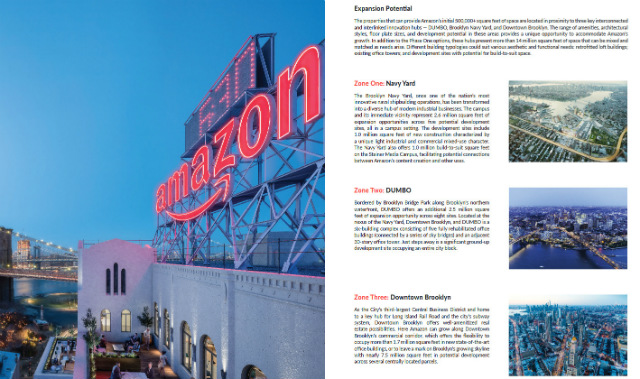 Amazon also passed on the "Brooklyn Tech Triangle," which the proposal defines as DUMBO, the Brooklyn Navy Yard and Downtown Brooklyn, despite visualizing the amusing possibilities the company could have explored with the old Watchtower sign space.

Lower Manhattan was another option, with the overhangs on the 2 World Trade Center tower acting as a kind of dystopian Burma-Shave ad for us mortals below. 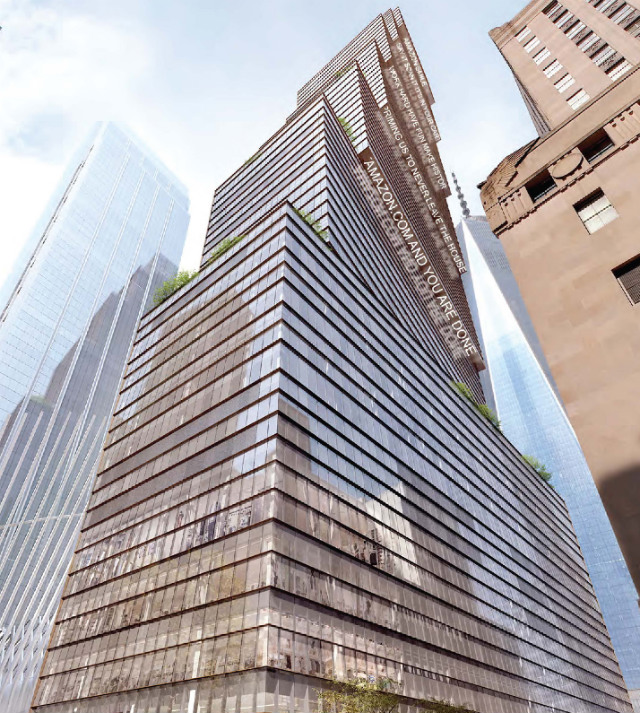 Governors Island is pitched as "an urban oasis, a remarkable opportunity for Amazon to complement its HQ2 campus," thanks to the fact that the Trust for Governors Island controls everything that happens on Governors Island: "The Island’s unique governance structure—with all services and development controlled by a single entity - positions the Trust as a true partner for Amazon." Sorry, dogs!

Sites in Long Island and the Lower Hudson Valley round out the presentation, but they are comparatively thin.

In its memorandum of understanding with Amazon, the City and State agreed to "undertake a community outreach process with the Company," and the 45-member Community Advisory Committee is the first step in that process. The full committee will meet quarterly beginning in January, and its three subcommittees, one on the entire plan, another on neighborhood infrastructure, and another concerning workforce development, will meet monthly, according to a press release from EDC.

On Wednesday morning at 10 a.m., the City Council's committee on economic development is holding an Amazon oversight hearing called "Exposing the Closed-Door Process." While Amazon's footprint in Queens includes City-owned land, the Council has no binding authority over the project, according to experts Gothamist spoke with. That authority ultimately lies with the Public Authorities Control Board. Amazon and New York have until March 11 of 2019 to conduct due diligence.

A Quinnipiac poll of New York voters last week showed that New Yorkers approved of the Amazon deal 57% to 26%, with support among Queens voters at 60%.

Respondents were less sure on the $3 billion in giveaways: 46% supported them while 44% opposed.

#amazon
#hq2
#long island city
Do you know the scoop? Comment below or Send us a Tip
A new Gothamist is coming! We’ve moved comments over to our beta site. Click here to join the conversation and get a preview of our new website.