As summer winds to a close, so too does the uproar over Citi Bike, the once vociferous shrieks of protest now little more than the occasional irritated mutter. While Jesus Christ himself is apparently unable to convince the DOT to relocate undesirably placed stations, there are plenty of tech wizards taking advantage of the system's glitchy official app, with at least two alternatives aimed at easing The Citi Biker's Burden launching in the next week.

First up is Availabike, created by former Google software engineer Jake Moshenko, which uses historical data to help cyclists more accurately determine at which stations Citi Bikes are available, as well as which stations are "dock blocked." Moshenko, an East Village resident who grew weary of the official app's lack of reliability, said Availabike relies on trends to determine which racks are most often full and empty at a given time of day, rather than relying on the often faulty sensors implanted in each station. 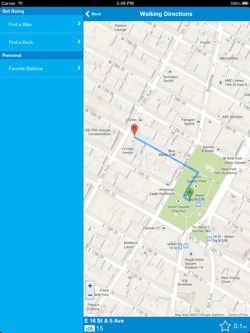 Another feature of Moshenko's app is its design. "The official app merges availability and fullness into a single view. Mine splits it up," he said. But Moshenko, who also created the coding app DevTable, has no delusions that his app is going to alleviate all of Citi Bike's issues.

"The demand is probably double what they're supplying, at least while the weather is nice," he said. "Me just telling you not to waste your time going to a specific station will reduce frustration, but it won't solve the problem."

Moshenko said he will probably charge around $1.99 for his app when it hits the market in the coming days. Eventually, he said he would like to add other features, like the ability to sync the app with Citi Bike accounts, and even add a module that helps users determine whether they should skip Citi Bike altogether and opt for the subway or bus.

But while the official app requires cyclists to perform a tedious series of taps, NYC Bikes aspires for users to access all the information they need with just one finger-flick.

Coneybeare founded the company Urban Apps in 2008, with his most popular development an app called "Ambiance," which offers users 3,500 different options for ambient sound to help them focus and relax. An avid Citi Bike user, Coneybeare calls the official app "kind of a nightmare," and decided to create an alternative utilizing Citi Bike's own data presented in a more straightforward manner.

"I realized it takes way too many taps, and there's way too much user interaction," he said. "The information you're requesting is really simple. I just approached it in a way that minimized effort to access info."

NYC Bikes will be available for free, with an ad-free version available for 99 cents. Perhaps the most useful feature, Coneybeare said, is that his app comes with a compass, with the idea that Citi Bike riders will be spared the frustration of wondering which direction the blue line associated with Google maps is telling them to go.

This is not to say that there aren't already many, many Citi Bike app knock-offs. NYC Bike Share, created by Pliable Matter LLC, has established itself as a favorite, as has New York Bike from Mintzer. But will there ever be an app that lifts the racks from beloved pocket parks and dumps them into the ocean where they belong? Get to it, lazy engineers!

#apps
#bike riding
#citi bike
#citi bike apps
#original
Do you know the scoop? Comment below or Send us a Tip