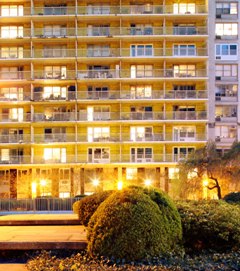 The police discovered the decomposed body of a 20-year-old woman at 4 Washington Square Village yesterday evening. WABC 7 says that the victim was last seen alive on Wednesday and was found "inside a locked bedroom." Neighbors had called the police to complain about a foul odor; the police are handling the situation as a homicide until they hear from the ME's office.

NYU's spokesman John Beckman released a statement; here is some of it:

“The apartment in question belongs to an NYU faculty member in The Steinhardt School who is currently traveling as part of a foreign study program; the dead woman is believed to be her daughter. Because of the circumstances of the death, the NYPD is treating it as suspicious and is investigating. The University has been and will continue to aid their investigation in any way possible.

“As a precaution, NYU’s Department of Public Safety will increase patrols in and around Washington Square Village to provide increased uniform presence."

Beckman added, "I believe I can speak for everyone at NYU when I say that the thoughts and prayers of our entire community are with this family at this time of tragedy.” NYU is also offering counseling.

Washington Square Village is located on the super block bounded by Mercer and LaGuardia, West 3rd and Bleecker. Many of the units are owned by NYU and leased to faculty.