Do You Want Mob Candy 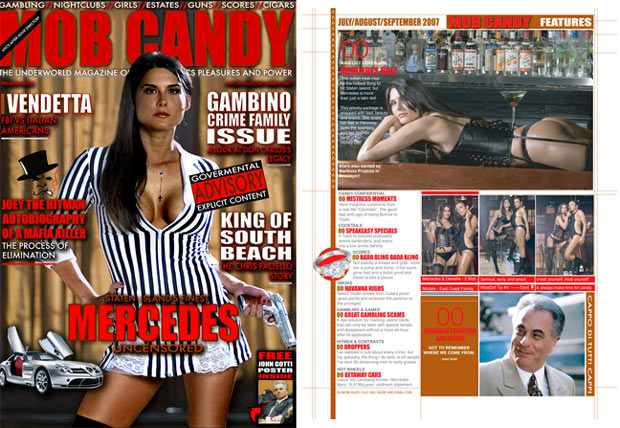 With The Sopranos gone, those wishing for a slice of gangster life and a free John Gotti poster can watch out for Mob Candy magazine. Back in May, Radar explained how the magazine came to be during a conversation between editor in chief Tyrone Christopher and publisher Frank DiMatteo and that the first issue would feature "articles on Don Carlo Gambino's legacy, 50 years of rats, FBI vs. Italian Americans, along with current mobster news, hot girls, hitmen, and contracts."

Yesterday, the Staten Island Advance suggests the new "Maxim for wiseguys" "may give some residents another reason to gripe about the borough's negative image," what with Staten Island bartender cover girl Mercedes Maia and a story about Chris Paciello, the Miami club owner with Staten Island roots. Hmm, if Borough President James Molinaro could boycott ice cream, will he put a kibosh on Mob Candy?

But the most intriguing thing about the magazine might be the fact that Danielle DiPietro is involved. You may remember her from the classic MTV True Life episode, "I'm a Staten Island Girl." (Time I'll Never Get Back has a funny recap; the DA was trying to get footage of the show to use in a case.) DiPietro was the aspiring actress on the show but now she is Mob Candy's vice president of advertising and sales. She told the Advance, "Most of the responses we've had have been very positive. People tell me 'I can't wait until it comes out.'"