Do You Rule If Virgin Mobile Insults You 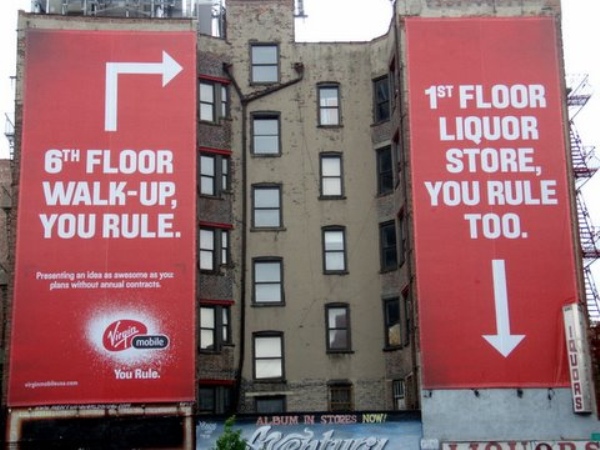 Virgin Mobile's "You Rule" campaign has been in town for a few weeks, but the confusion still runs high. Ad agency Havas McKinney developed an ambitious outdoor campaign that involves specific posters and billboards to praise residents of various New York neighborhoods, such as Chelsea, Murray Hill, Lower East Side, Upper East Side, and Bed-Stuy.

But some people have been insulted by the ads (such as one Chelsea resident who called Virgin Mobile to switch to another provider) while others have noticed some ads have been misplaced. Now Staten Islanders are the latest to join the fray, wondering if their "Staten Island, You Rule" ad is tribute or an ethnic insult. Here's what the ad says:

"Staten Island, you rule. The name says it all. You are truly an island, physically and mentally. Thank you for your front yards, detached garages and SUVs. Thank you for the ferry -- the best cheap date ever. Thank you for being our down-to-earth, suburban, predominantly Italian-American cousins. To show our gratitude, we've got something for you. No, not baked ziti -- cell phone plans without annual contracts, so you're not locked in. And with no annual contract, you're free to move between our other plans. Like you would on a bridge or ferry."

One S.I. resident told a reporter, "That's dumb. Put dumb in big letters, For that comment, I'll stick with AT&T." And clearly those are fighting words, because AT&T (you know, the new AT&T, the old Cingular) sucks.

Even though Havas McKinney is based in North Carolina, Virgin Mobile folks in NYC helped with the campaign, even asking for suggestions. The Kensington Blog had a funny take on how a Kensington-specific ad would be worded.