by Jake Bittle and Jasper Craven

In April of 2016, the city installed over 300 high-powered “safety lights” at the Bushwick Houses, a New York City Housing Authority complex in Brooklyn. The lights were part of the Mayor’s Action Plan (MAP) for Neighborhood Safety, a $210 million initiative aimed at reducing violent crime in public housing. The plan targeted 15 developments that house 60,000 New Yorkers and see almost one-fifth of all crime at NYCHA.

From the beginning, though, the lights have been the centerpiece, and at around $80 million have proven one of the costliest single elements of the program. A NYCHA official quoted in a newsletter from late 2016 said “the state-of-the-art lighting changes the dynamics of the neighborhoods dramatically,” helping “light the way to safety.” At the end of 2017, TV stations reported that NYCHA overall had seen a 7 percent drop in violent crime thanks to the lights. NY1 hailed a “plunge” in crime, which NYCHA officials attributed to the lights.

But it’s been more than a year now since the lights came on in most developments, and residents say their impact has been less than transformative.

“If you want to make trouble, you will, no matter what,” said James McQuade, a resident of the Ingersoll Houses in Brooklyn. McQuade called the lights “useless,” and pointed out that aging scaffolding around the apartment buildings make it easy to lurk in the shadows, unnoticed.

“Nothing ever happened to me, even before they put in the lights,” said Geraldine Range, of the Polo Grounds development in Washington Heights. “The lights make it look nicer, but I’ve never had a problem before.”

According to NYCHA data, only seven of the fourteen developments with lights have seen any reduction in crime complaints since the lights went on, and those changes have for the most part been minute—crime has trended up or down in these developments by less than one incident per month, on average. 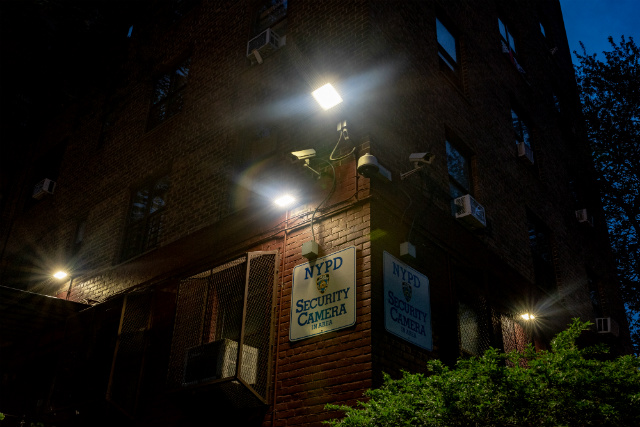 At the Bushwick Houses, for instance, the lights have been on for two years. The development saw an average of 3.4 violent crimes per month in the two years before the installation, and as of March 2018, have seen an average of 3.3 violent crimes per months since the installation. (This month, two Bushwick House residents, a 62-year-old woman and a 54-year-old man were both found dead of gunshot wounds in their respective apartments.)

The changes at these developments were not noticeably different from trends in NYCHA as a whole. At four Brooklyn developments where lights were installed at the beginning of 2017—Ingersoll, Brownsville, Tompkins, and Van Dyke—crime was about 3 percent lower than it had been the year before. That was less than the 10 percent drop in crime seen among Brooklyn developments as a whole, and a 7 percent crime drop for NYCHA overall.

These numbers, like most crime data, say little about whether the lights have actually deterred crime. Crime reports separated by time of day were not available, and MAP has deployed numerous interventions in the developments all at once, so it’s difficult to say what difference the lights have or haven’t made. But the numbers do seem to support many residents’ feelings that the installation of the lights has not been followed by the “big impact” promised by de Blasio.

“These lights represented a significant investment from the city, and the city is currently pursuing cost effective investments to the physical environment can enhance the City’s efforts to promote public safety and help reduce crime,” the spokesperson said.

The NYPD has not yet responded to our requests for comment, while NYCHA referred us to the MOCJ. 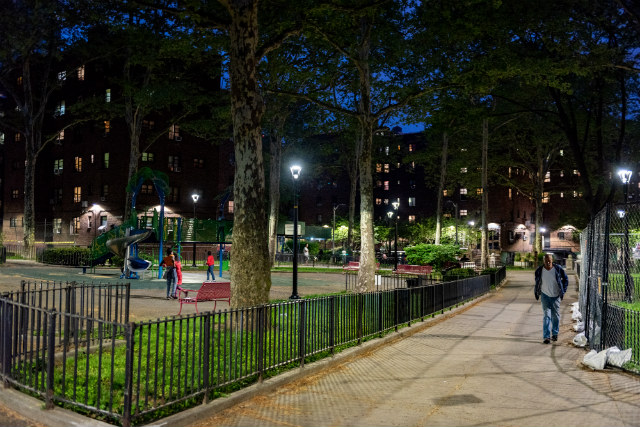 Dean Obermark, a research analyst at the Urban Institute, said the recent crime numbers made it difficult to argue that the lights have had a significant effect on crime in the developments.

“There’s a lot of volatility in reported crime, and in some of these complexes you have pretty small numbers from month to month,” he said. “Some of these changes can be pretty misleading in either direction, since we’re really only talking about a few incidents a month. My inclination would be to say it really looks like there’s nothing going on one way or the other.”

Obermark adds that any number of mitigating factors could have contributed to a rise or a fall in the violent crime rate in certain developments, and a single outlier month can skew the data in either direction. What’s difficult to dispute, though, is that there hasn’t been any significant decrease in crime across the board since the lights went on.

The lights, though, have accounted for a significant portion of MAP spending, costing between $3 and $8 million per development thus far. The upgrades have been funded by the de Blasio administration, the City Council, and the Manhattan District Attorney’s office.

Most residents Gothamist spoke to said crime hadn’t noticeably changed since the lights were installed, or since MAP began. A few said they still felt unsafe going outside at night, while other longtime residents praised the relative safety of NYCHA developments as compared to a decade ago.

“The crime definitely isn’t like it used to be, hasn’t been that way in a while,” said Gwendolyn Sellers, who’s lived in Polo Grounds since 1973. “They’re putting in work, I understand, but they have to listen if we say there’s other things that need to be fixed.”

Even as it began installing lights in the first projects, the city partnered with the University of Chicago Crime Lab on a study that sought to determine whether outdoor lighting at NYCHA would reduce crime. The first-of-its-kind study, which tested the lights in a random selection of 39 NYCHA developments, found that temporary high-powered floodlights had a significant effect on nighttime outdoor crime, reducing it by nearly 40 percent. 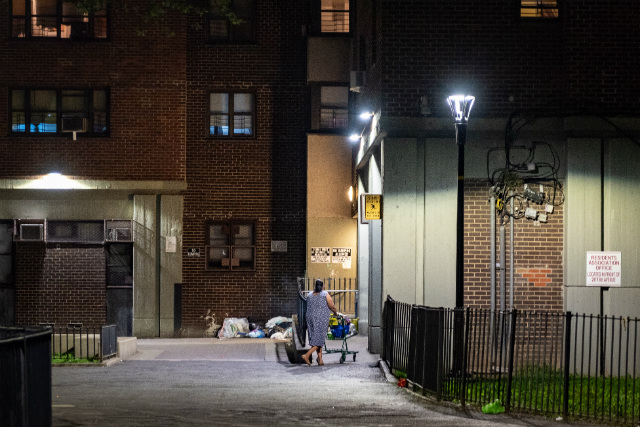 It is unclear whether new lights in the MAP 15 have resulted in similar deterrence of nighttime outdoor crime, but that deterrence has not resulted in a drop in crime overall in those developments. And residents interviewed by Gothamist, whether they liked the lights or not, also doubted that they made much of a difference.

“Why would they?” Williams added. “It’s just lights and cameras.”

And Lexi, a 19-year-old Ingersoll resident who declined to give her full name, said the lights are an irritant to residents.

“The lights are too bright for my eyes; I feel like the cops are watching my every move,” she said. “None of us like the cameras or the lights, I wish they’d take them down.”

The Crime Lab study also noted that “it would be reasonable to suppose that there are diminishing marginal returns to lighting—that the effects of lighting begin to decline past some saturation point,” the saturation point being about three lights per block. The lights in the MAP developments are less powerful than those used in the study, but each development now has hundreds of permanent lights, in some cases as many as a dozen per square block. 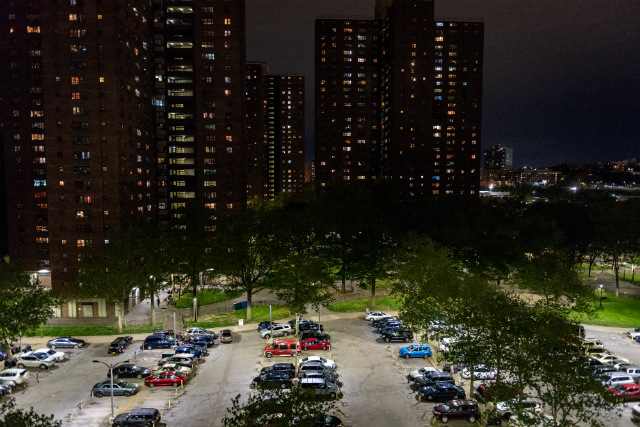 University of Connecticut Professor Richard Stevens, an epidemiologist who has long studied the physiological impacts of flood lights at night, said nighttime glare can degrade sleep quality and interfere with humans’ circadian rhythms, which act as the body’s internal clock and influence the production of important hormones. In 2016, the American Medical Association unanimously issued guidance over the potential adverse health impacts of LED street lighting, including retina damage and interruptions to circadian rhythms.

“The engineers and the experts see a crime problem, but then they go way overboard, and overlight the neighborhoods,” Stevens said. “They obliterate the night.”

Residents at Polo Grounds had their own list of much-needed fixes for the development. As part of the MAP initiative, City Council and Manhattan DA have also allocated tens of millions of dollars on upgraded locks for building doors. But residents said most of the new locks had been tampered with or busted, and not repaired since.

“These lights are all right, but they don’t stop crime,” said a seven-year resident of Polo Grounds who declined to give her name. “They don’t stop nothing.”

That resident’s mother chimed in, agreeing that the lights did little, before noting that the locks on her building were broken within a week of being installed.

The spokesperson for MOCJ said that it was inevitable that new doors would sometimes break, and noted that the city is “partnering with behavioral scientists at the firm ideas42 to understand why doors are getting broken and understand how that can be prevented.”

The Red Hook Houses in Brooklyn will be the last development to receive the new lights, but installation will not take place until 2021, when NYCHA expects to complete the work to repair the damage done by Superstorm Sandy. 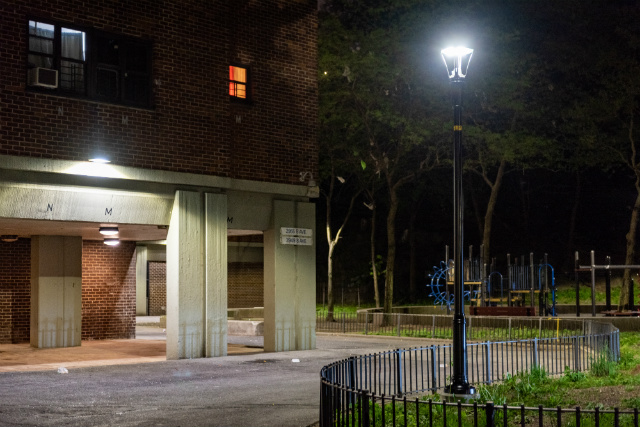 Qween Williams, who also lives at Ingersoll, said she wishes the city would invest money in youth programs and hot-water heaters at NYCHA developments, not more surveillance cameras and lighting. She said the lights brightly shine through the windows of her friends on the first two floors, and haven’t had any real impact on the community.

#crime
#lights
#nycha
#longform
#original
Do you know the scoop? Comment below or Send us a Tip