Do Amazon's Opponents Have Any Hope Of Stopping Queens Campus?

On Tuesday, Deputy Mayor Alicia Glen appeared on CNBC’s “Squawk Box” to push back against the Amazon backlash. “New York City is a notorious city of people with a lot of opinions,” Glen said, stressing that while there would be more “community engagement,” the City and the State were moving forward with their plan to give one of the world’s most powerful corporations around $3 billion in tax breaks to bring as many as 40,000 jobs to Long Island City. "I can guarantee you five years from now all New Yorkers will be thanking us for having brought them," Glen said. “This deal is not gonna get stopped.”

But the project’s opponents say that they are currently exploring every option they can to block, slow, or alter the government’s deal with Amazon.

So who has the authority to decide if the project moves forward? What could stop the Amazon development, or slow it down?

How is Amazon getting around the City Council?

Normally, a company looking to build more than 4 million square feet of office space over several city blocks would have to submit to the City’s Uniform Land Use Review Procedure (ULURP), a lengthy process that requires oversight from community boards and borough presidents, and approvals from the City Council, the City Planning Commission, and the mayor. The huge development originally planned for the pieces of land around the Anabel Basin that Amazon later snatched up was going through ULURP.

Amazon is sidestepping the ULURP gauntlet by having the state overrule the city’s authority: Cuomo plans to approve the tech campus through a General Project Plan under the state Urban Development Corporation Act, which exempts the project from City zoning and the ULURP process.

The UDC Act was passed in 1968 as a way to build affordable housing over the objections of recalcitrant communities, but it was later revamped to spur economic development. The Urban Development Corporation that it created now operates under the name Empire State Development (ESD), having built the Javits Center, Brooklyn Bridge Park, Battery Park City, and the Atlantic Yards project all free from city oversight.

A UDC project has to fall under one of six categories laid out in the text of the law. Jeffrey Baker, a land use attorney who kept the Atlantic Yards developers snarled in lawsuits for years, says the state could designate the Amazon campus as a “land use improvement” or an “industrial” project, but that in both instances, the text of the law requires that the site of the development is “a slum, blighted, deteriorated or deteriorating area.”

In the case of an industrial project, the bar is even higher: a project has to be in a blighted area, and also in “a condition of substantial and persistent unemployment or underemployment.”

“They have to make this determination: but for bringing in this building, there is a huge amount of unemployed or underemployed people there and this place is blighted and it keeps it from being developed,” Baker says. “I don’t know how you come up with that kind of determination.”

Wait, so in order for the State to override the City’s authority, they have to determine that the Amazon site in Long Island City is “blighted”? The median rent in LIC is $2,450/month!

Yes, though over the years, “blight” has come to mean whatever the state wants it to mean.

John Kaehny, the executive director of Reinvent Albany, a good government group that has been extremely critical of the state’s mixed record on economic development subsidies, said that the state’s definition of blight is “very elastic.”

“They’re able to find interpretations of blight that defy common sense,” Kaehny says. “It’s a point of potential resistance for people who oppose the Amazon deal and potential lawsuits that could delay it.”

Samuel Stein, a PhD student at Graduate Center of the City University of New York who teaches urban studies at Hunter College, tells us that “the blight designation is ridiculous, but it’s always been ridiculous.”

“I was just looking at photos used to determine blight in urban renewal projects on the West Side of Manhattan, and they look the exact same as the photos people use to show preservation of healthy neighborhoods,” Stein says. “The same buildings, same businesses, same people.”

Could someone sue to stop the Amazon deal over a bogus “blight” designation?

They could sue, but the odds of success are long: the UDC experts we asked could not think of a single successful legal challenge to the law.

In the Atlantic Yards’ case, the courts eventually concluded that the area was blighted because it included eight acres of unused rail yards, but Baker, the land use attorney, says he has been contacted about potential legal challenges to the Amazon deal. He believes the Amazon site is different: “I look at it objectively from what they had there, with the facts, and what they have here, and I think they have a much harder time.”

Has the UDC been used in Long Island City before?

Yep. On Monday, Mayor Bill de Blasio pointed out that the UDC “has been used in many other instances including on the Queens West development, right next door to this site, which has been a great success.”

Queens West's UDC proposal is from 1990, and has "done much to transform this formerly contaminated waterfront area into a thriving community," according to the state’s website.

“Obviously the most significant difference is time - Long Island City in 1990 was nothing like Long Island City is now in 2018,” Baker says. “In fact it could probably be argued that the Queens West project did what was expected by jumpstarting redevelopment in LIC and further intervention by ESD isn’t warranted.”

Why doesn’t Amazon want to go through the normal city approvals process?

ULURP can take years, and in that process, development plans can change.

“They don’t want to go through ULURP, they don’t want to, in their view, extort concessions from Amazon,” Kaehny says of the state. “The deal Amazon wants to do is with the governor, and the whole point to the subsidies and the construction grant are about creating a narrative in which the governor had an important role in landing the big fish.”

Adam Kilduff, a spokesperson for ESD, said that the state hasn’t chosen Amazon’s project designation under UDC yet. “At this very early stage of the process, we are just beginning to engage Amazon and other stakeholders, including the community, to develop a plan,” Kilduff wrote in an email. “The project, when developed, will comply with all applicable laws, including the UDC Act.”

So what authority does the City Council have? I thought the Amazon deal included City-owned land?

While the City Council has an advisory role in completing an environmental review under the State Environmental Quality Review Act, the review process is ultimately controlled by the state.

Assuming the Amazon deal is applied to the UDC, Stein says, that’s about all the power the City Council has.

“I think back to the last big project like this, it was Atlantic Yards, and Tish James was the councilmember for the area. She was not in support of the plan as it was constructed, and she couldn’t stop it.”

City Council Speaker Corey Johnson told reporters on Wednesday that he has “more concerns than I can voice on this.” 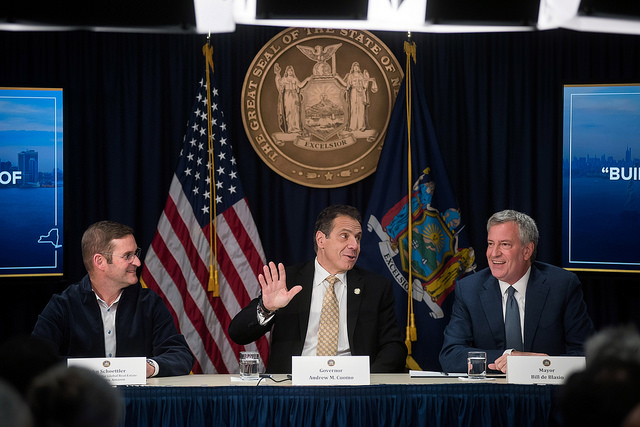 Fine, who does decide if the Amazon campus deal happens or not?

The State Public Authorities Control Board, which is comprised of representatives from the governor and the legislative majorities of both houses, will have to vote on the plan, and their vote to approve it must be unanimous.

While Kilduff, the ESD spokesperson, says that the land use plan will be part of the PACB’s decision, he said the state will not need the PACB’s go-ahead to give Amazon $505 million in grants, because the state will use funding programs that do not require the PACB approval. He declined to name any of the possible programs.

The PACB usually meets mid-month, though they haven’t released the date for December’s meeting yet. According to Kaehny, the PACB likely won’t discuss the Amazon deal until the new Democratic State Senate majority gets to put its representative on the board.

“The December meeting would be weird with lame duck Republicans still on the board,” he says.

When the PACB does meet, the vote won’t be on piecemeal aspects of the plan, it will be on the whole shebang.

“The whole thing together goes to the PACB,” Stein says, pointing to a 2005 PACB vote that killed Mayor Michael Bloomberg’s vision of a new Jets stadium on the West Side (and the city’s bid for the 2012 Olympics). “That was essentially Sheldon Silver saying ‘fuck you’ to Michael Bloomberg.”

However, David Friedfel, the director of state studies at the Citizens Budget Commission says that too is up to the PACB. “They can decide to take things up individually.”

What about the other $2.5 billion that Amazon is supposed to get in tax credits? Who has oversight there?

The $1.8 billion Amazon is getting from the city is coming from two separate “as of right” tax credit programs, meaning any large corporation could have gotten them automatically. The remaining $1.2 billion is coming from the state via Excelsior Jobs Program tax credits, which are available to any company that applies, at the discretion of the ESD.

The Citizens Budget Commission noted in a blog post this week that Amazon’s projected tax credits would exceed the amount currently allowed under the law: “Assuming Amazon meets its job targets, the State Legislature would need to approve an extension of Excelsior that increases the caps.” The ESD has not disputed this.

Friedfel adds that the Excelsior tax credits would not be under the purview of the PACB.

What’s the timeline on the Amazon deal?

According to the Memorandum of Understanding between Amazon, the City, and the State, the parties have until March 11 of 2019 to conduct due diligence, with the estimated approval of the directors of the ESD in November of 2019.

What are politicians from Long Island City saying?

“Long Island City is not a blighted slum, nor is it in danger of becoming one. I do not believe there is substantial unemployment or underemployment at the proposed Amazon site,” said City Councilmember Jimmy Van Bramer, whose district includes Long Island City. The councilman acknowledged that while “underemployment does exist at Queensbridge,” the city’s largest public housing complex which is near the proposed Amazon site, “The State is wrong here. The use of UDC is inappropriate.”

Senator Gianaris, whose newly-won Democratic majority will soon exert greater influence on the PACB, also opposes the state’s use of UDC for Amazon. “It’s taking people out of equation,” Gianaris told Gothamist. “There’s a land use process, which is a vehicle through which the public has input. There’s all sorts of shenanigans that should be subject to legal review about the way they did it.”

As for what authority the PACB has over the $505 million grant, Gianaris says, “Our lawyers are going over that right now.”

#amazon
#amazon hq
#jeff bezos
#PACB
#original
Do you know the scoop? Comment below or Send us a Tip