DMV Says No to GETOSAMA Plates 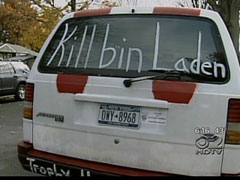 There are 9.3 million vanity license plates in the United States, but every now and then there is one person whose choice of to proclaim on his/her plates causes some problems. Typically, the problematic plate is weeded out thanks to the DMV’s “blue list”of banned letter and number combinations ranging from the obvious, like GOD, NYPD and POL1CE, to the less so, like 3M TA3. Still the NY State DMV’s online plate lookup allows for things like HATE, H8-BUSH and UARSEHOL.

Hauppauge resident Arno Herwerth got angry when the DMV sent him a letter saying the vanity license plates for his crudely painted-up- as-an- American-flag minivan, which also sported things like “Kill Bin Laden” on it, were not approved. The plates were to read GETOSAMA. 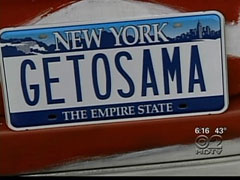 The letter stated that the DMV prohibits anything on a license plate that is "in the discretion of the commissioner, obscene, lewd, lascivious, derogatory to a particular ethnic group or patently offensive.” Herwerth claims that his first amendment rights are being violated, although that is a slippery argument since there seems to be conflicting legal opinions on whether license plates are a public or non-public form. Plus, Herwerth looked a little, uh, odd while wearing a Kill bin Laden t-shirt while being interviewed by CBS 2.

We checked several permutations of OSAMA in the DMV vanity plate on line ordering system and most seemed to have been put on the blue list, although we would suggest BADOSAMA to Mr. Herwerth, since it was the only one with a similar message to his. He may also want to consider NUK-IRAN. And for the record SADDAM isn’t taken.

#arts
#bin laden
#cbs
#departmentofmotorvehicles
#dmv
#first amendment
#firstamendment
#Hauppauge
#license plate
#long island
#longisland
#news
#ny state
#nypd
#united states
#vanityplate
Do you know the scoop? Comment below or Send us a Tip
A new Gothamist is coming! We’ve moved comments over to our beta site. Click here to join the conversation and get a preview of our new website.