We have entered Week Two of the Operation Safe Cycle ticketing blitz, in which officers park in bike lanes and then ticket cyclists for whatever. Generally, this is business as usual, but here's a fresh twist on an old favorite: Cyclists who opt to pay their tickets online are now given an $88 bonus surcharge, plus additional undeserved points on their license.

According to Steve Vaccaro, the city's preeminent cycling rights attorney, the DMV appears to be using the same online form filled out by drivers paying off moving violations. This form, however, conveniently ignores the fact that cyclists are exempt from the surcharge and additional points to which their driving counterparts are subject. Vaccaro's firm sent the department a cease and desist letter, but have not yet received a response. 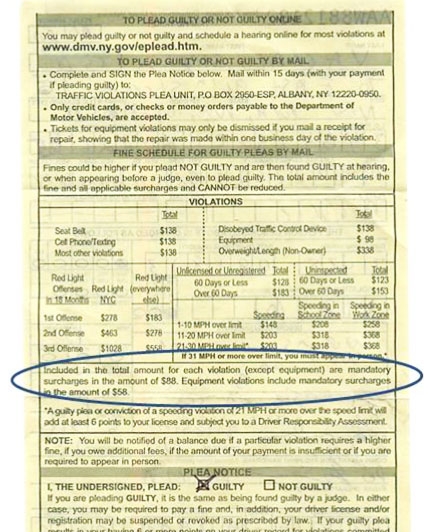 But Vaccaro alleges that the error appears to be more nefarious than a simple computer glitch. "Judging from the pre-printed traffic forms supplied by the DMV, you’d think it’s trying deliberately to trick cyclists into overpaying their fines," he wrote on Streetsblog. "The form states: 'included in the total amount for each violation (except equipment) are mandatory surcharges in the amount of $88. Equipment violations include mandatory surcharges of $58.'"

All in all, it looks like Operation Safe Cycle has been a runaway success, with even Commissioner Bill Bratton getting in on the fun. Only one more week, though, and then things return to normal.

#cycling
#operation safe cycle
#vision zero
Do you know the scoop? Comment below or Send us a Tip