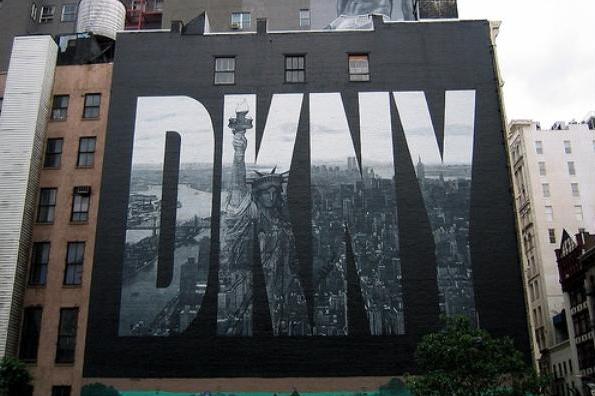 Earlier this year, six-floor 600 Broadway, at the corner of Houston, was sold for $71 million. While the Pottery Barn was a reported casualty, there might be another: The huge DKNY painted sign on the side of the building.

WWD reports DKNY lost the right to use the wall this month. Clothing retailer Abercrombie & Fitch will be moving into the building with a 40,000 square square foot store (multi-level, as the building is a total of 65,000 square feet), which suggests A&F wanted category exclusivity...and maybe a picture of half-naked frolicking young men?

The DKNY wall has attained iconic status in Soho, with its black-and-white pre-September 11 skyline at the biggest intersection. It was also incorporated into the opening credit sequence of NYPD Blue (see it at 13 seconds). But a more recent DKNY campaign involving painted orange bikes has been criticized and ridiculed. [Via reader Gabriel - thanks!]

#600 Broadway
#advertisement
#dkny
#soho
#wall
Do you know the scoop? Comment below or Send us a Tip