"We found that spaces that are otherwise up to code are afraid to approach the Fire Department because they know they don't have a cabaret license," Burkart, of the NYC Artist Coalition, told Gothamist. "That's where this is creating a safety crisis."

The circa-1926 Cabaret Law prohibits operating without a license any "room, place or space... in which any musical entertainment, singing, dancing or other form of amusement is permitted." Licenses are notoriously difficult to acquire—out of roughly 25,000 bars and restaurants in New York, only 97 venues currently hold a cabaret license, according to City Hall. As a result, venue owners say, a small group of big-budget nightclubs flourish while smaller venues struggle to keep their doors open.

"The city will argue that the law is not currently being enforced to regulate dancing, and only to enforce safety requirements. But the stories on the ground will tell you different," said East New York Councilman Rafael Espinal, who called Monday's Cabaret Law hearing.

"My full intention is to repeal the law from the books," he added.

The Cabaret Law has its origins in a racist crackdown on jazz clubs during the Harlem Renaissance, City Hall acknowledged Monday (from a 1926 Board of Alderman's opinion: "the ‘wild’ stranger and the foolish native should have the check-rein applied a little bit"). Critics say the law has become an NYPD tool to stamp out venues where marginalized, tight-budget communities thrive. Venue owners are required to navigate zoning and myriad requirements for bouncers, surveillance cameras, and sprinkler systems. Anecdotally, venue owners say, the law is opaque and unpredictably enforced (former mayor Rudy Giuliani was a big fan of the law during his quality-of-life crusades). It's part of a broader enforcement mechanism the casualties of which include Shea Stadium, Palisades, and the original Silent Barn.

"New York is one of the most heavily regulated jurisdictions on earth," said attorney Andrew Muchmore. The owner of Muchmore's Cafe in Williamsburg, he's also been cited for a Cabaret Law violation and is currently challenging the constitutionality of the law in court. "It has an amazing array of very complicated laws that small artists and musicians in underserved communities—that cannot afford an army of lawyers—have trouble complying with."

"Any genuine concerns that the cabaret law purports to address are already addressed by existing law," Muchmore added, citing the building code and fire code.

While Cabaret Law fines aren't prohibitively expensive, "If you are found to have a pattern of dancing in your establishment you may not be able to renew your [liquor license]," Muchmore said. Because door covers typically go to musicians and sound crews, "If you can't maintain your liquor license, you cannot exist." 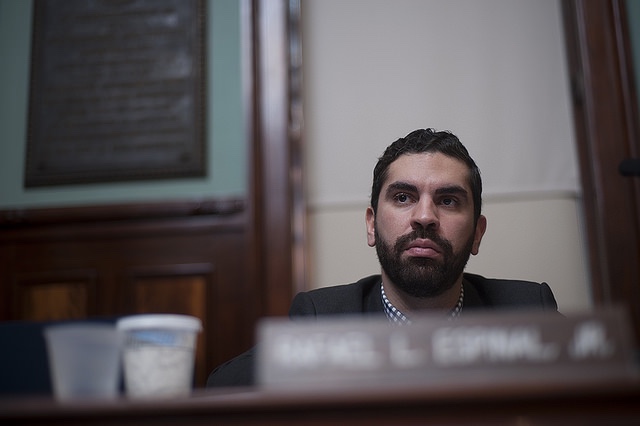 The number of venues with cabaret licenses has shrunk significantly in recent decades, down from 12,000 in the 1970s, according to advocates.

The law "is being enforced in an arbitrary manner that ends up discriminating," argued Olympia Kazi of the NYC Artists Coalition. "And guess who gets discriminated? The venues that we've been talking to, the DIY venues, they told us, 'If we have rock and roll, nobody will show up [to enforce the law]. If we have hip hop, where likely we are going to have African American music, NYPD tend to go in.'"

Rachel Nelson is the owner of three Bushwick venues—licensed bars Happyfun Hideaway and Flowers for All Occasions, and the formerly-DIY Secret Project Robot. "Usually it's tied to gentrification," she said. "They started enforcing the Cabaret Law in Williamsburg right around the time they rezoned the whole waterfront to be condos."

Mayoral Advisor Lindsay Greene of the Office of Housing and Economic Development testified Monday that enforcement of cabaret licenses has been "infrequent" under Mayor de Blasio. She could not, however, provide data on the number of fines issued during his tenure (Crain's reports that no fines have been issued at least since January 2016). Greene added that City Hall is discussing the law's controversial legacy internally, but declined to elaborate, citing Muchmore's ongoing lawsuit.

Councilman Espinal is also introducing legislation to establish an Office of Nightlife, chaired by a so-called Night Mayor. Exact responsibilities for the office are still being worked out, though Espinal said Monday that "it will help businesses navigate the city's onerous regulations" to "insure venues are safe."

At the same time, Espinal said, the Night Mayor would work with local community boards concerned about noise and other quality-of-life issues around venues. "The Night Mayor will help bridge that gap between the community, the city, and the venues," he said.

Nelson of Happyfun Hideaway says she received a $5,000 fine in December, when the FDNY cited her for an improperly positioned padlock. "If [the Night Mayor post] is about safety, teach us how to be safe," she said. "If more oversight just means they keep enforcing these arbitrary laws, this could mean status quo for us or a little bit worse."

"I've been doing DIY shows for years and years and I would say 90 percent of spaces could use a little help in learning how to be safer. I think that's a valid concern," Nelson added. "But is that the real concern here? I don't think it is. I think there's a lot to do with the fact that the people who are coming to New York are looking for a different experience than me when I came here. I was actually looking for parties and DIY. And the people now are coming for careers and nice condos on waterfronts."

Mayoral spokesman Ben Sarle said in a statement that, "Most of all, we want to ensure New Yorkers are safe and secure," adding that City Hall is "looking forward to working with Espinal on his nightlife legislation package."

#cabaret law
#night mayor
#rafael espinal
#original
Do you know the scoop? Comment below or Send us a Tip