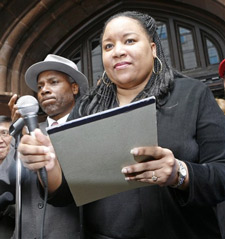 The Columbia University community is currently divided over the controversy involving a professor's possible plagiarism, which has escalated to racial politics.

Constantine denies the plagiarism allegations, suggesting she's actually the victim of plagiarism and calling it a "witch hunt." Teachers' College professor Barbara Wallace and a TC graduate Mai Kindaichi issued statements of support for Constantine. Wallace, who with Constantine are the only two tenured black TC professors, referred to "acts of racism and oppression" stemming from the community, while Kindaichi, who helped Constantine "craft one of the manuscripts under scrutiny," says she was never interviewed and feels the school "blatantly ignored a truthful statement I had issued to Dr. Constantine’s lawyer."

In the meantime, the administration said Constantine's position is secure, which angered at least one other professor at Teachers College. Associate professor Celia Oyler any student caught plagiarizing would be expelled and that the same principle should be applied to faculty. And now some TC students and faculty say the school has not addressed the topic of race very well, even in the wake of the noose incident.

Newsday's Sheryl McCarthy has interesting opinion column, noting that all three of Constatine's accusers are women and at least two are minorities (one is Asian-American, the other is African-American). The African-American lawyer who led the investigation for TC, Lennox Hinds, told McCarthy the investigation "rigorous," "She lifted materials without attribution...The standards for plagiarism are very clear."