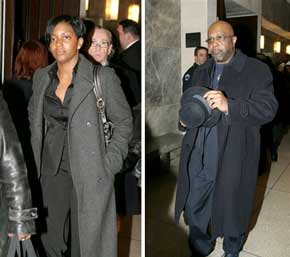 The trial of three police detectives for the fatal shooting of Sean Bell has been a magnet for scrutiny. And lately, there are reports Bell's parents and fiancee disagree about how the case is going.

On Saturday, a lawyer for Bell's parents, Neville Mitchell, said, "We're somewhat concerned about the prosecution. We don't want to denigrate the prosecution, but we want a little more passion. The family's looking for justice." Which a source translated to the Daily News, "They're not prosecuting like they believe in the case. Are they presenting a no-holds-barred case? You could make the argument that they're not."

Bell's fiancee and the mother of his two daughters Nicole Paultre Bell, however, issued a statement, in support of the Queens DA's office, "I thanked the prosecution team handling this case for their conduct and how they have presented this case and stood for justice for Sean." One of Paultre-Bell's lawyers, Michael Hardy, added, "If there's some dissatisfaction it is not - and I repeat, not - from Nicole Bell, Trent Benefield and Joe Guzman." (Benefield and Guzman were also in the car when Bell was shot on November 25, 2006.)

Newsday spoke to a defense lawyer, Murray Richman (who is not connected to the case), who says he thought there was "strong evidence of guilt against the detectives" before the trial started, but said of the prosecution so far, "The early impression thus far, to my satisfaction, they have not made a case beyond a reasonable doubt."

Detectives Michael Oliver and Gescard Isnora face manslaughter charges while detective Marc Cooper faces a reckless endangerment charge. The defendants waived their right to a jury trial, opting instead for a bench trial. Today, the NY Times looks at Judge Arthur Cooperman's behavior in the trial so far.

#Arthur Cooperman
#Bench Trial
#Nicole Paultre Bell
#nypd
#queens
#queens da's office
#sean bell
#trial
Do you know the scoop? Comment below or Send us a Tip
A new Gothamist is coming! We’ve moved comments over to our beta site. Click here to join the conversation and get a preview of our new website.