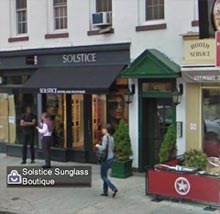 Just before 6 p.m. last night, an emotionally disturbed person stabbed four people during a frenzy of violence in the Meatpacking District. The man started at a sunglasses boutique, where he stabbed a manager, and then stabbed three people at an outdoor salsa event in the plaza, before being subdued by many cops and taken into custody. One witness told the Post, "The guy was crazy, he looked like he had rabies or something. He had a real wild look in his eye when he pulled out the knife." Another described to the Daily News, "This guy was throwing the cops off of him like The Hulk."

All four victims reportedly had non-life-threatening injuries. According to the News, the man walked into the Solstice Sunglass Boutique on 9th Avenue between 14th and 15th Streets and "mumbled a question" about prices: "Suddenly, the lunatic whipped out a three-inch folding knife and plunged it into the store's 28-year-old manager... The psycho chased after a frantic female employee, who quickly darted inside" The Diner (at 9th and 14th).

The News says one diner "tossed a chair at the lunatic in a bid to protect his date, and the psycho responded by tossing a table at the diner, shattering a glass front door. The psycho, described by police as a black man in his 20s, then turned his twisted attention to a weekly Salsa-dancing class being held in a traffic triangle along Ninth Ave."

NY1 spoke to a witness at Sunset Salsa, "We chased him and he pulled out a knife he swung with the knife,cut one guy, stabbed the other guy behind the DJ. That's when we grabbed him and I picked up a chair to protect from the knife. We grabbed him held him down until the cops came and took over and they maced him and everything cause he was out of control." Police were also injured (but not stabbed) when trying to deal with the man.

The cops, who apparently also maced him, eventually put him into a straitjacket. Another onlooker who was across the street from the action at the Apple Store said, "I saw a bunch of guys slamming chairs at this guy and I thought he was the victim. But when I walked over I saw him holding a bloody knife and other people holding their wounds. It was crazy."

#attack
#crime
#meatpacking district
#stabbing
#stabbing spree
#sunset salsa
#violence
Do you know the scoop? Comment below or Send us a Tip