A striking bearded dragon lizard, prized for her distinctive orange scales, has been abducted from an Upper West Side pet store, swiped from her tank and smuggled out under a bandit's shirt. Workers at Petqua (located at Broadway and 98th Street) say they watched the thieves steal Sandy, a coveted three-year-old reptile whose owners had boarded her at the shop while they went out of town for the holiday weekend, but could not catch them in time. Police have reportedly opened an investigation into the heist, while Sandy's family has put out a $1,000 reward for her safe return, no questions asked. 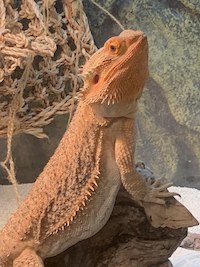 Just before 4 p.m. on Saturday, a Petqua manager said he saw two young men, believed to be in their early 20s, enter the store and head downstairs, where Sandy had taken up temporary residence with the tropical fish and turtles. The manager, Sam, recognized one of them as a shady, would-be lizard dealer: "He created suspicion around him," Sam told the Westside Rag. "He'd tried to sell me some baby dragons about a year ago. I said no."

Another Petqua employee was downstairs when the suspects allegedly took Sandy: He told Sam he saw one of the men stuff Sandy up his shirt, but when he asked them just what in the heck they thought they were doing, the pair took off. Sam reportedly chased them down Broadway, but lost track of the suspects when they split in opposite directions.

Unfortunately, Sam didn't know how to get ahold of Stacey Shapiro, Sandy's human, while she was away. Shapiro explained in an email that she found out about the loss on Tuesday. "We went to pick them up [and] the owner of the pet store said 'we're really sorry,'" she told the NY Post. "I thought one of them had died." (The Shapiros also boarded a boy dragon.)

Having read about the "disgusting" and "inhumane" conditions in which some breeders keep reptiles—neglected in filthy tubs and left for days without food or water, and as Shapiro told Gothamist, there's "no telling what they do with the baby lizards they don't sell"—Shapiro told the Post that she's "concerned about the wellbeing of Sandy," and just wants her to come home unscathed. Sandy is reportedly worth about $250, but the men might consider her particularly valuable because of her breeding potential: Female bearded dragons can lay more than 20 eggs at a time.

According to the Westside Rag, police seek two suspects in their 20s, one roughly 5'4" and the other about 5'11." So, if you see two youngish men sneaking around the UWS with a bright orange lizard, you can tip off the cops or let the Shapiros know at sandylizardnyc@gmail.com.