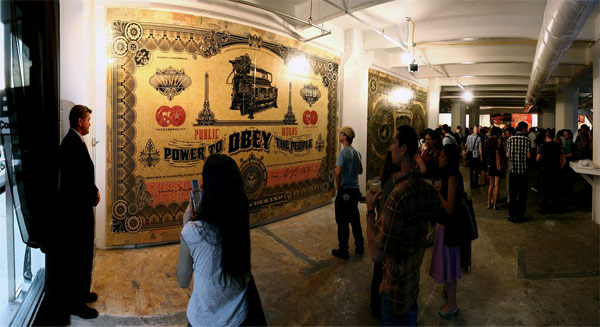 Some more details about the stink bomb incident at the Shepard Fairey show Thursday night. Twenty-four-year-old Alan Cooper of Bushwick was arrested for attempted arson, after he tried to set off a stink bomb in a DUMBO gallery. Cooper was acting with an accomplice, who got away. From the Daily News:

Cops later led Cooper away in cuffs, but not before the artist, Shepard Fairey, confronted him.

"I put a lot of time and energy into this," Fairey told Cooper. "What's your problem?"

The bespectacled Cooper, wearing khaki shorts and a long-sleeved pink shirt, put the blame on his friend.

"I was with him, but I didn't know he was going to do it," Cooper said, according to the artist.

Cooper, who works at an East Village restaurant, was also charged with reckless endangerment; his accomplice has not been caught. Police say that one of the two was carrying a book bag, which makes us wonder if gallery shows will need metal detectors, bag checks, and cavity searches in the near future. What's not clear is whether Cooper and/or his accomplice is The Splasher.

Fairey told the Post, "This is serious. I've been arrested for doing street art. I knew I would be held accountable for my actions, and he should have considered that jail may be a possibility." He added that he believed he was targeted "Because I've moved beyond just doing street art, some have the idea that I've been corrupted. I've been able to have an art career and a design career, yet I continue to do street art and therefore I should be punished."

Yesterday's reports said that Cooper could face up to 15 years, which sounds like a lot for a stink bomb. Read our extensive thread about the incident here.

An advisory notice about admission to tonight's show, including warnings about long lines and advice on showing up early that we received from the organizers is reprinted below.

Due to the incident that happened on Thursday night at the opening
reception in DUMBO, Brooklyn, the NYPD is asking that we implement a
few changes for tonight's opening.

Bags and backpacks will be searched by security before entering the
building. Please don't bring any spray paint, markers, or anything
that could be flammable.

Security will be letting people in a few at a time to avoid
over-crowding in the gallery and elevators.

Because of these changes we anticipate that there will be a line
outside of the building to get in. We encourage you to arrive as close
to the 5pm starting time as possible to avoid a long wait. We have
increased the opening hours to try to accomodate everyone.

Please be patient with our staff and security tonight. We are working
very hard to create a safe and enjoyable environment for everyone.

E Pluribus Venom new works by Shepard Fairey and Space Cadets new
works by Souther Salazar will be on view until July 21st.

Shepard Fairey's exhibition in DUMBO, Brooklyn will be on view until
July 7th.

UPDATE: the World's Best Ever blog sent in a shot they caught of the alleged stinkbomber before he entered the gallery. Who's that guy to his right? Anyone else catch a picture? 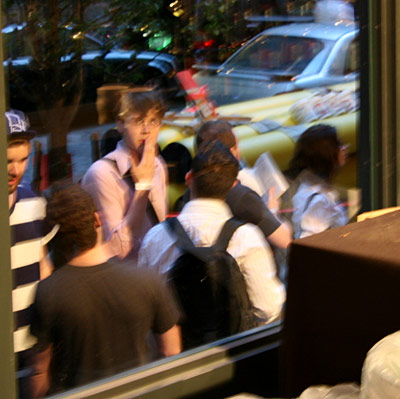 Photograph of the Shepard Fairey opening by f.trainer on Flickr