A Far Rockaway houseboat belonging to a TV cooking show host and occasional underground lobster roll purveyor was sunk by unruly Airbnb guests over the weekend, according to online posts by the foodie, Ben Sargent. Sargent hosts the Cooking Channel's Hook, Line & Dinner and rose to prominence in part through his goofy lobster-roll-vending alter ego Dr. Klaw, an Ali G-like drug dealer caricature with a knack for setting up photo shoots with New York publications and, by all accounts, making and vending tasty lobster rolls. The Department of Health didn't approve of his unlicensed operation and shut him down in 2010.

Until last weekend, Sargent was also renting out a houseboat named Ziggy Stardust at Far Rockaway's Marina 59 on Jamaica Bay, once home to the bug-and-art-infused Boatel, a floating DIY hotel concocted by a group of artists to levels of fanfare on par with Dr. Klaw.

Sargent is in the process of reviving the Dr. Klaw shtick via an elaborate Kickstarter campaign seeking $45,000 to stage a "live action treasure hunt" consisting of Sargent driving up and down the coast on a motorcycle decked out to look like a lobster, seeking to "track down" Dr. Klaw and stage invite-only seafood parties. Regarding Saturday night's sinking of the Ziggy Stardust, Sargent wrote on his blog, "I’m very bummed to tell you that one of Dr. Klaw’s best hideaways is now sitting under 15’ of water due to a bad group of renters."

Sargent added, "I don’t know if the Ziggy can be saved," and said he's turning his attention from the lobster project to fixing the boat.

In a Kickstarter update, he blamed the wrecking on "one bad renter and a bunch of dishonest party folk" who "sunk her right to the bottom."

I figure the next weeks will take me away from Kickstarter as I figure out what to do...Already, a bunch of friends have chipped in and loaned me scuba equipment and their support so I was just able to dive down and close all the windows which is really step one before figuring out pumps and the system to get her up and out of the water!

All I ask of you guys is that we shift gears a little...I feel like all you KLAW fans might be down to rally behind this. I can't promise lobster rolls just yet...But I promise we can get this fucking boat out of the water and it will be a place for all of you to rest your head!

I'll keep you posted as the progress continues, but if you guys can spread this around I'm confident we can a least hit the goal here and put this money into fixing up the Ziggy as a Klaw seafood destination that will blow your mind!!!

Natasha Quam was staying across the marina in another Airbnb houseboat overnight on Saturday. She said she didn't see or hear what happened, "But some old guys cleaning fish said it happened about 5 a.m. [They said] [t]here were three loud pops and it started going down."

Quam said she rents a houseboat in the marina with a friend every other weekend or so during the summer. "I have no idea how they got the Ziggy to sink," she said. "It survived Sandy!"

The Airbnb listing for the Ziggy Stardust has been taken down, but a site that scrapes the short-term vacation rental service's data indicates that it had three bedrooms and had been renting for $1,250 a night. Photos of the interior are here.

A description by Sargent demands, "If you are not CLEAN...Super clean and very responsible please do not even consider staying on this boat! THIS IS NOT A PARTY BOAT." Later on, he writes, "You are an adult and should know how to respect other people's property. Don't fuck this up for those people who don't even need to be told ANY of this." 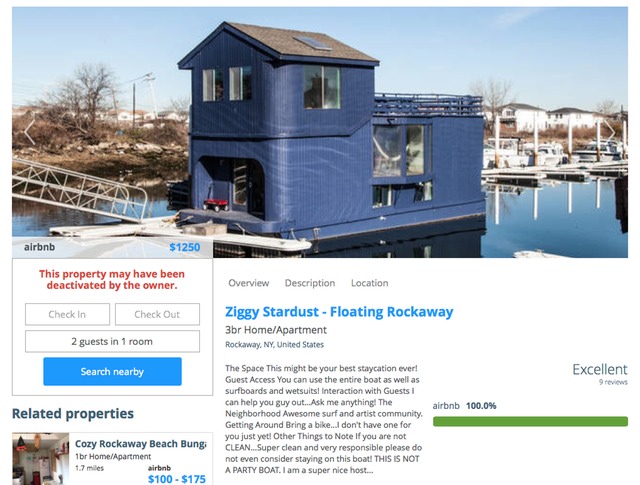 A guest named Annica described the boat as "incredibly magical," and "a side of New York I never even imagined existed."

Marina 59 allows overnight stays, but not full-time live-aboards, and the marina closes from November to April. Its last widely publicized encounter with bohemia, the Boatel, was discontinued after the summer of 2011 in part because of waning interest by the people who organized it, in part because of damage done by Hurricane Sandy, and in part because, as manager Rosie Stevens explained it in an interview last summer, there would be "too much red tape" to recreate the enterprise in an aboveboard way. Also, in the process of getting permits to turn some of the boats into long-term rentals, some of the boats' artistic features, including composting toilets, had to be taken out.

As of last summer, business at the marina was booming. There is, however, Stevens said, "kind of a clash between old and new customers." Old-timers who have been coming for decades rise early and enjoy fishing, whereas the younger clientele "want to come relax on their houseboat and go surfing." A rave thrown by newcomers in the past few years drew police on land and in helicopters, she said.

New York law prohibits renting out entire apartments for periods of time shorter than 30 days if the primary resident isn't home, but that law doesn't apply to houses, nor, we assume, houseboats. Given that, the matter of short-term rentals at Marina 59 seems to be wholly between the marina and the boat owners.

As far as the sinking of the Ziggy Stardust, Zablozki said, "We have no idea. We're still working with the customer to find out exactly what happened."