Even though he's totally gross for pawing female staffers, allegedly leering at a 14-year-old intern and generally creating a terrifying workplace for women, Brooklyn Assemblyman Vito Lopez has avoided criminal charges despite numerous allegations of sexual harassment. Since Lopez, still a powerful Democrat, is running for New York City Council, let's just force ourselves to examine the insane depravity that staffers detailed to investigators—depravity that somehow ISN'T harassing enough to qualify as illegal.

And then there's the pinkeye—here's an excerpt from the New York State Joint Commission on Public Ethics report: 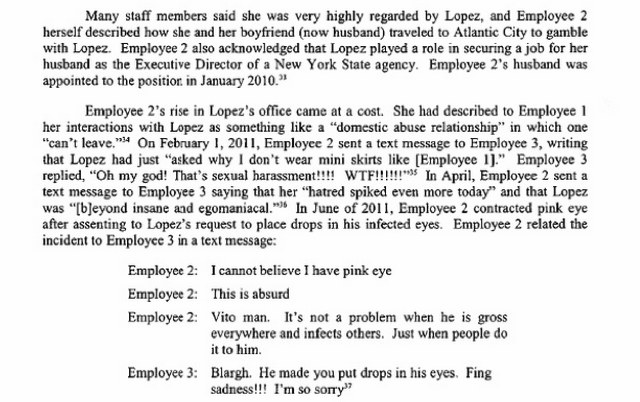 You can read the whole report from JCOPE. Don't worry: Albany has paid some of the staffers $100,000 of TAXPAYER money to make the whole thing go away. Lopez has denied the claims, issuing a statement saying, "Salacious and sensational claims in the JCOPE report are fallacious. Should there ever come a time when Mr. Lopez is actually afforded the fundamental rights supposedly allowed everyone, the truth will finally be told... There is an all-out war against an ailing senior member."

#Albany
#brooklyn
#gross
#JCOPE
#pervert
#pinkeye
#vito lopez
#worst boss
Do you know the scoop? Comment below or Send us a Tip