by Cindy Rodriguez and Yasmeen Khan

The long-awaited disciplinary trial starts today for the white New York City police officer accused of using an illegal chokehold to kill Eric Garner, an unarmed black man, on Staten Island nearly five years ago. The administrative proceeding will determine whether Officer Daniel Pantaleo will keep his job at the NYPD.

Garner’s death sparked massive protests after video surfaced of the altercation with police in the Tompkinsville neighborhood of Staten Island on July 17th, 2014. Pantaleo is seen in the video gripping Garner across the neck and pulling him down from behind.

But a Staten Island grand jury declined to indict Pantaleo. The U.S. Justice Department also investigated the case for possible civil rights violations, but has not announced the outcome. Pantaleo faces no criminal charges.

His administrative trial is expected to last two weeks and will take place at police headquarters in Lower Manhattan. Judge Rosemarie Maldonado will hear the case. As Deputy Commissioner of Trials, she is the highest-ranking judge within the NYPD.

The case will be prosecuted by lawyers from the Civilian Complaint Review Board, or CCRB, an outside agency that investigates complaints against police officers made by the public. Through a memorandum of understanding with the police department, the CCRB handles disciplinary proceedings involving the most serious allegations against officers.

Pantaleo is charged with violating the NYPD’s patrol guide by using a chokehold, a banned procedure, and by restricting Garner’s breathing. To win their case, prosecutors will have to prove he committed the crimes of attempted assault and strangulation by a preponderance of the evidence, instead of the much higher standard used in criminal court of beyond a reasonable doubt.

On that July afternoon, officers approached Garner on a sidewalk on Bay Street to arrest him for allegedly selling loose cigarettes, as they had many times before. The video showed Garner shouting at police to leave him alone, and Pantaleo jumping on Garner’s back and throwing his arm around Garner’s neck to take him down. Pantaleo can be seen shoving Garner’s face into the sidewalk while several other officers hold him down. Garner, who was 43, repeated the words “I can’t breathe” 11 times before appearing to lose consciousness. His dying words quickly became a rallying cry for the emerging Black Lives Matter movement.

“Pantaleo and other officers who engaged in misconduct related to Eric Garner should have been fired years ago,” said Loyda Colon, co-director of the police reform group Justice Committee, in a statement. She added it was “shameful” that Mayor Bill de Blasio allowed the case to drag on so long.

The case against Pantaleo will include findings from the medical examiner’s office which concluded that Garner died of a homicide from "compression of neck (choke hold), compression of chest and prone positioning during physical restraint by police."

The defense plans to call a medical expert from St. Louis to challenge that evidence. They have argued that Garner’s own health problems, including chronic asthma, contributed to his death.

“We will fly him in, and he will testify that the ME's report is inaccurate,” said Pantaleo’s attorney, Stuart London.

The defense has argued that Pantaleo used a move that he was taught at the police academy which involves placing one arm over the suspect’s shoulder and the other coming in under the suspect’s opposite arm. A retired instructor who taught Pantaleo the so-called “seatbelt maneuver” will also be called as a witness.

Four months after Garner’s death, the NYPD began the process of retraining 22,000 officers on the use of force, including training on de-escalation techniques and controlling officers’ adrenaline. William Bratton, the commissioner at the time, said the training was in the works before Garner’s death. But the incident created new urgency for changes at the department.

Around the same time, the NYPD also launched its first pilot with body-worn cameras. As of March of this year, the police department has outfitted all patrol officers with body cameras. Reports show that some NYPD officers still use chokeholds. 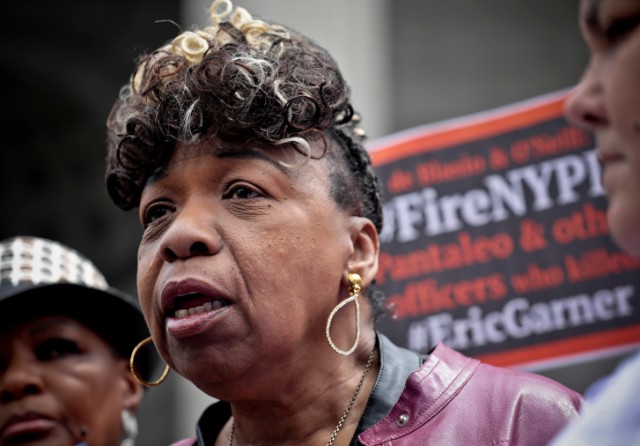 Since Garner’s death, Pantaleo has been on modified desk duty. He joined the police department in 2007 and spent his career mostly policing street crime in lower-income neighborhoods.

A WNYC analysis of courts records in 2014 showed that Pantaleo’s career embodied the philosophy of “broken windows” policing: The vast majority of his arrests were for low-level offenses, such as marijuana possession or trespassing. Less than 10 percent of cases where Pantaleo was the arresting officer were for felony offenses.

Pantaleo’s disciplinary trial was delayed for years because the NYPD said it was waiting for the Justice Department to complete its investigation into Garner’s death. But in July 2018, the NYPD announced it would allow disciplinary proceedings to go forward, saying “there is no end in sight” to the federal probe. At a recent press conference, de Blasio said he keeps asking the Justice Department for an update on the case but never receives an answer.

“I don’t understand how so much time could pass,” de Blasio said. “There’s nothing. There’s no indication of a decision or whether there will ever be a decision.”

Besides Pantaleo, Sergeant Kizzy Adonis, the supervisor on site, is the only other officer to face disciplinary charges. Adonis's trial date has not yet been set. Gwen Carr, Garner’s mother, has accused de Blasio of a failure to hold more police officers accountable for her son’s death.

Pantaleo’s lawyers have mounted several legal challenges to the trial. Just this month, they argued in state court that the CCRB lacked jurisdiction to prosecute the case. A state judge ruled last week that the trial can move forward.

Disciplinary proceedings are open to the press and public in real time, in the police department’s small trial rooms, but recording is not allowed, and no records of the proceeding will be released.

In the end, Judge Maldonado will issue a report and recommendation on whether Pantaleo should lose his job. She will submit that recommendation to Police Commissioner James O’Neill, who has final say on whether to punish Pantaleo and what the punishment is.

Maldonado’s recommendation may not become public because a section of state civil rights law, known as 50-a, makes police personnel records confidential. The New York Civil Liberties Union sued the city to make all disciplinary recommendations public. But last year, the state’s highest court ruled against them.

“The irony of the situation is that the hearing is a public hearing — the public can attend and hear the evidence,” said Donna Lieberman, executive director of the NYCLU. “But when it comes down to a decision on the evidence, there is no sunlight. Transparency is shut down.”

Yasmeen Khan is a reporter covering crime and policing at WNYC. You can follow her on Twitter @yasmeenkhan.

#black lives matter
#broken windows
#CCRB
#daniel pantaleo
#eric garner
Do you know the scoop? Comment below or Send us a Tip