This week, nearly five years after NYPD Officer Richard Haste shot and killed 18-year-old Ramarley Graham inside the bathroom of the Graham family's Bronx home, the 35-year-old officer will face a disciplinary hearing at police headquarters.

Graham's family and social justice activists say the departmental proceeding, which comes with a maximum punishment of dismissal from the NYPD, follows a string of grave injustices. Haste was initially indicted by a Bronx grand jury on two counts of manslaughter, but the case was later thrown out due to a technicality. Another grand jury declined to indict Haste, deciding that the case lacked sufficient evidence. Then, last spring, federal prosecutors declined to pursue criminal charges, also citing insufficient evidence.

Meanwhile, the Graham family says, the NYPD has unjustifiably delayed its internal disciplinary hearing. The NYPD first filed disciplinary charges against Haste and two other officers from his unit in June 2012, but Haste has remained on modified duty since the fatal shooting, and reportedly received a raise in December 2015. Last year, records show, Haste earned $94,364.

"The system already failed me, I think the whole world can see that," Graham's mother, Constance Malcolm, told reporters last spring, when the hearing was announced. "But to be at the disciplinary hearing will be a good thing for me so he [Haste] can see me and see the pain he caused me. He needs to see me." 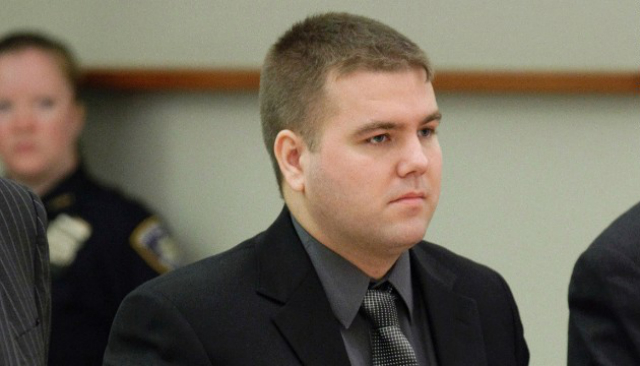 Haste, formerly a member of the NYPD's narcotics unit, was watching a Wakefield bodega on February 2, 2012 when he was alerted that Graham, standing nearby, possibly had a gun. Haste then followed Graham to his home, and charged into the house and up a back stairwell to a second-floor bathroom, where he fatally shot Graham as the teenager leaned over the toilet. Graham's grandmother and six-year-old brother were inside the apartment at the time.

Haste later testified that he believed Graham was reaching for a gun, but investigators didn't recover a weapon from the scene. Marijuana was found in the toilet, suggesting that Graham had leaned down to dump it.

Haste's attorney Stuart London told the NY Times that his client is facing possible dismissal from the NYPD on the grounds that he showed "poor tactical judgment leading to the discharge of his firearm." (London could not immediately be reached for comment, as his office is closed for the holiday.)

The Graham family has not yet been formally notified of the internal charges leveraged against Haste, according to a spokesperson for Communities United for Police Reform, a coalition of social justice activists that has been organizing with the Graham family over the years.

The NYPD also has not released any reports on an investigation into Hastes's actions, and did not respond to our request for comment.

The city settled a wrongful-death lawsuit with Graham's family in 2015, totaling $3.9 million.

William Aronin, a criminal defense attorney with the firm Perry Aronin, has represented victims of police brutality. Citing the recent sentencing of former NYPD Officer Peter Liang, who shot an unarmed man in a darkened stairwell in 2014, Aronin said he's noticed a pattern: no jail time, coupled with a civil settlement for the victim's family and internal discipline. "I don't know if it will be adequate for the families and activists, but it's probably what the police unions are trying to turn into the norm," he said. "Accountability, but keeping the officers out of jail."

Graham's family and supporters are planning to pack the courtroom at tomorrow's hearing, which is open to the public. Beyond Haste, McLoughlin and Morris, they will call for the firing of the more than 12 officers allegedly involved in Graham's death and its aftermath. They will also hold a press conference and rally outside 1 Police Plaza, around 1:00 p.m.

"All the officers responsible for Ramarley's killing and the related misconduct must be held accountable and fired from the NYPD," the group wrote on a Facebook page for the event.

Activists are also concerned that the NYPD will withhold the outcome of Haste's trial, using section 50-a of the New York State Civil Rights Law. The NYPD typically released NYPD disciplinary records until last fall, when former NYPD Commissioner Bill Bratton called for an end to the practice, citing 50-a. Mayor de Blasio supported Bratton's position, saying it was in accordance with the law, but has since called on the state to amend 50-a. Advocates say the mayor is not exercising his administrative powers to its fullest extent.

#disciplinary hearing
#nypd
#police involved shooting
#ramarley graham
#richard haste
Do you know the scoop? Comment below or Send us a Tip
A new Gothamist is coming! We’ve moved comments over to our beta site. Click here to join the conversation and get a preview of our new website.