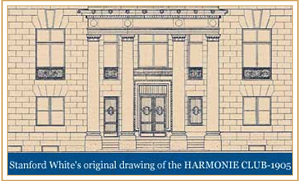 H. Dale Hemmerdinger, Gov. Spitzer's nominee to replace Peter Kalikow as chairman of the MTA, relinquished his membership in the Harmonie Club, a private social club that some accused of excluding minorities. The club has a membership of 1,100 and none of them are minorities. Mayor Bloomberg is a former member, but he also resigned when the club's complexion came under scrutiny.

Initially, Hemmerdinger refused to quit the Harmonie Club, saying that while he was no longer "active" in the organization, he was club president 20 years ago and said that it had made efforts to recruit minority groups, but could generate little interest. According to The New York Sun, the Harmonie Club was formed in 1905 to counter discrimination against Jews by Christian social clubs.

The issue of the Harmonie Club was only one problem that Hemmerdinger encountered during last week's confirmation hearing before the state senate. During questioning, it became clear that the nominee's familiarity with transportation issues was less than comprehensive. From The New York Times:

Asked what the state would do to handle more riders if New York City imposed congestion pricing, Mr. Hemmerdinger replied: “I only know what I read in the papers at this point.”

On his familiarity with the authority’s proposals for a fare increase: “I’ve looked at it as I’ve read it in the paper.”

On whether he had any new ideas that could help avoid a raise in fares: “I’m only on the outside. I can only read the paper.”

On the authority’s efforts to sell development rights to the Hudson Yards in West Midtown: “I don’t know anything about it beyond what I read in the paper.”

Hemmerdinger, who along with his wife was a prodigious fund raiser for Gov. Spitzer, was asked if he'd continue raising money for political campaigns. “On occasion, like we’ve done in the past. I don’t see any reason to change our behavior.” After the hearing, Hemmerdinger admitted that he was unaware that ethics rules would prohibit further contributions to the Gov. Spitzer or any other candidate for the office of governor or lieutenant governor.

If Hemmerdinger's name sounds familiar, it's because he was accused by Republican operative Roger Stone of engineering a break-in into his apartment to leave an abusive phone message on Gov. Spitzer's father's voicemail. Stone lives in a building owned by Hemmerdinger and he later apologized. Also, a former concierge at Hemmerdinger's Central Park South building is suing him and his building's management company for maintaining such a strict bathroom break policy that she was forced to soil herself.