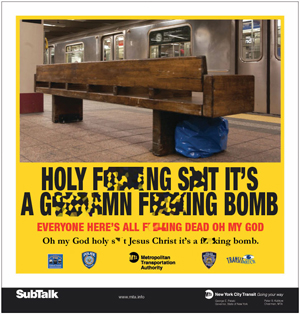 The city is still taking seriously an unsubstantiated threat of a dirty bomb issued over the Internet that was publicized last night. The New York Times is reporting that Deputy Commissioner Paul Browne stated the threat was noticed by the NYPD after it appeared on Debka.com, a website that reports many threats, some of which are substantiated. The particular threat that caused the alarm last night was one that named New York, Los Angeles, and Miami as possible sites of a truck-bomb radiological attack.

The NYPD responded by placing portable radiation sensors at key spots around the city and setting up check points to monitor traffic into Manhattan. Increased air and maritime patrols were also part of the response. Miami law enforcement deemed the threat not credible and declined to increase vigilance in south Florida. We couldn't find any reference to a terror threat mentioned in the Los Angeles Times, except for an orphaned photo of a single armored personal carrier parked in front of a court house.

(Bowdlerized image taken from an unedited version at Cleverest.com)