Diocese Of Brooklyn Accused Of Covering Up Ex-Priest's Sexual Abuse

More than a dozen women have come forward in recent weeks to accuse a former Queens-based Catholic priest of sexual abuse, and to allege that both Maspeth's Holy Cross Church and the Diocese of Brooklyn worked to cover up decades of his predatory behavior.

According to attorney Mitchell Garabedian, fifteen women now say they were sexually abused by Father Adam Prochaski, who was assigned to the Holy Cross parish from 1969 to 1994. The alleged victims, now between the ages of 37 and 50, claim the abuse started when they were as young as 5 years old, and lasted well into their teenage years. Prochaski is believed to still be living in Queens.

For several years, authorities with Holy Cross were aware of the priest's abusive behavior, but intentionally turned a deaf ear to the children's complaints, according to Linda Porcaro, who served as a teacher at Holy Cross from 1986 to 1991.

"In 1991, about seven girls came to me, most of them Polish immigrants, to say Father Adam was sexually abusing them," Porcaro tells Gothamist. "I went to then-principle Sister Benedict Jankowicz...She said, 'Everybody knows about Father Adam, the whole parish knows about it.' Then she laughed and didn't do anything."

Many of the girls' parents, Porcaro notes, felt indebted to the priest for his role in helping them emigrate from Poland. She suspects others were afraid they'd be blacklisted by the church.

When Jankowicz left later that year, Porcaro confronted the new principle about the allegations, and convinced her to phone the diocese. "The Diocese of Brooklyn sent people in [to the school] to interview students," recalls Porcaro. "They took no action." 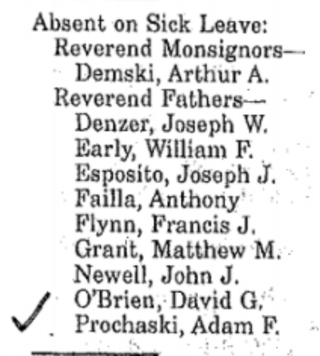 Disgusted by the church's alleged inaction, Porcaro left the school later that year, but says she still tried to stay in touch with the young victims. Three years later, in 1994, she was informed by a Holy Cross teacher that Father Prochaski had been "arrested" by the diocese, and sent to a rectory in South Brooklyn.

"Father Prochaski was absent on sick leave, according to the official Catholic directory, from 1995 to 2002—in my experience, absent on sick leave is often code for treatment for pedophilia," says Garabedian. "Why didn't Bishop Daily or other supervisors notify parishioners and the public about Father Prochaski sexually abusing children, so that children could be kept safe?"

According to Carolyn Erstad, a spokesperson for the Diocese of Brooklyn, Prochaski abandoned the ministry after he was approached by diocesan officials in 1994. "He has not been supported by the diocese, housed by the diocese, or permitted to minister as a priest since that time," Erstad said. "In 1995, he cut all contact with the Diocese of Brooklyn."

That spokesperson said she had no explanation for why he was listed in the official directory until 2002.

Under the current New York law, most victims of sexual abuse can only bring charges against their abusers until the age of 23, making it unlikely that any of the 15 women will take Prochaski to court. While the Child Victims Act would've changed that, the bill ultimately died without a vote in the state legislature earlier this summer (a fate that some abuse survivors blame on Governor Cuomo's inaction). The Catholic Church was among the most outspoken opponents of the bill.

The 15 women are hoping to enter a settlement program started earlier this year by the Diocese of Brooklyn, which allows victims of past abuse to seek financial compensation.

No criminal charges have been filed against Prochaski, and it remains unclear whether the ex-priest will ever answer for his alleged abuse. "I believe the diocese has been in touch with him," said Garabedian. "He may still be collecting a pension for all we know."