DigitalLife at the Javits 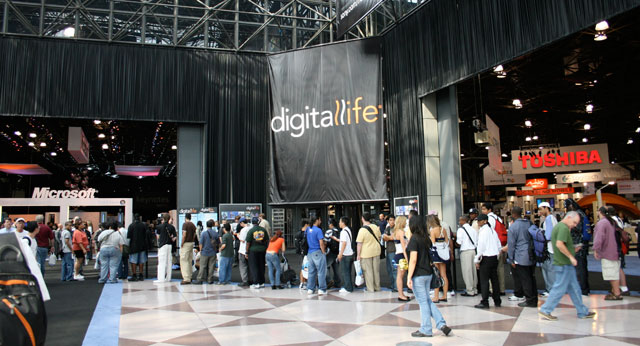 The fourth annual DigitalLife event kicks off today at the Javits Center. Featuring over 200 exhibitors, it is easily the best preview of digital gadgetry coming to life in the fall quarter. Today saw new product releases from Palm (with the Centro - a $99 Treo follow up targeted to new smart phone users exclusive to Sprint), iRobot (new cleaning robots!) , Gateway (a sleek new all-in-one called "One"), and Microsoft (Extenders for Windows Media Center).

There is plenty to see and try out. The GGL has kicked off several tournaments for games such as Halo 3 and Warcraft 3 among many others, that total in $100,000 in prizes. Tonight several players from the NY Giants will be on hand for video game face offs against attendees. With 200 exhibitors, you'll quickly get a handle on the latest in next generation technology in Cellular, Gaming, HD-DVD, Lifestyle and more.

At a press announcement yesterday, RedOctane officially launched Guitar Hero III at Splashlight Studios in Times Square. The City of New York returned the favor and proclaimed that yesterday was to be known as "Guitar Hero Day". If you're a big fan of this series, the game is available for play at the Expo, but expect to be waiting on line for dozen or so stations where you can rock out.

The event runs from now until Sunday. Hours are today until 7pm, Friday & Saturday 11-7pm, and Sunday 11-6pm. Tickets are $12 for adults and $8 for students/seniors when purchased online at DigitalLife.