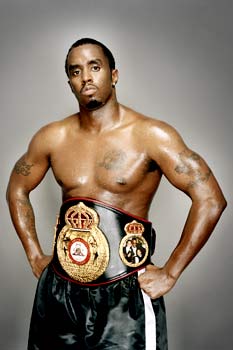 Anyone looking for closure in the Diddy SoHo slapfest case, look no further. Reports are that prosecutors aren't pursuing criminal charges against Mr. Combs anymore because "Stephen Acevedo appeared to stop cooperating with police - after accusing the rap star of sucker-punching him inside the exclusive SoHo club on Oct. 13 after the two quarreled over women." Of course, Acevedo's lawyer says he is taking the "high road" and declining to talk further about the incident, because he believes in "good Karma."

It turns out that the "he said, he said" case wasn't going to go anywhere anyway, according to the Manhattan DA's office, who stated yesterday that they couldn't "prove the charge beyond a reasonable doubt."

Stay tuned for more news on Acevedo's Karma. Will it be good? Will it be bad? Will Diddy use those guns (at right) to sucker punch Acevedo one last time?