Did You See The Gigantic Flamingo Floating In The East River?

Attention, would-be influencer who maybe lost track of a giant pink flamingo floaty ahead of an Instagram-oriented Memorial Day pool party: I found your inflatable, it's been cruising up and down the East River all day, dutifully creating Content in advance of your big summer kick-off bash. 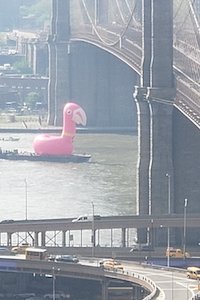 Or, that's how I'm choosing to explain this giant flamingo that's been cruising up and down the East River all morning, confusing commuters.

Twitter user Yolo C. tells Gothamist she spotted the rogue flamingo from her workplace window around 9:30 a.m., and was excited to watch it make its way toward the Brooklyn Bridge.

"I wondered where it was going, and why," she said. "At first, I thought it was sailing to Pier 17 ... It sailed uptown and then back downtown, in the area of the South Street Seaport."

Others shared in the sense of wonder, speculating that maybe the wonky migration pattern had something to do with climate change, a political statement, or—the simplest explanation, which often ends up being the correct one—capitalism. As Yolo C. pointed out, our flamingo friend sports the logo of a certain sugary carbonated water vendor on its chest. And as you may have heard, our local waterways have lately been repurposed as fluid runways for roving barge billboards, big illegal LED monstrosities that blink ads at you from our rivers with relative impunity. This hulking-balloon-flamingo-as-guerilla-marketing-stunt could be like that, only cheekier and more whimsical; a direct appeal to your sunny, carefree summer side, assuming you even have one of those and hey maybe you don't.

Anyway, is it working? Are you thirsty? Do you get it?

Can someone please explain the two-story #flamingo in the East River, please? Pretty please? https://t.co/0NDvz8kFYX pic.twitter.com/PiCYkpn5u0

A giant pink Flamingo going up and down East River this morning. A political message? #nyc pic.twitter.com/bZ7gxsiwTp

Additional evidence toward a spon-con theory: AdAge reports that a certain beverage corporation has launched an ad campaign involving an augmented reality Instagram component, as well as—and this is really the smoking gun— "an inflatable flamingo raft emblazoned with the [company] logo nearby the text, 'always pool ready.'"

We have contacted the soda company for answers, and will update if we hear back, and/or if they accept our suggestion to make it an enormous floating coffin next time.

UPDATE 2:28 p.m.: It's now been spotted in the Hudson River! And a tipster tells us that a certain beverage company is throwing a party at Pier 17 with DJ Khaled and Chrissy Teigen tonight, and "the flamingo is part of the AR campaign they're promoting." 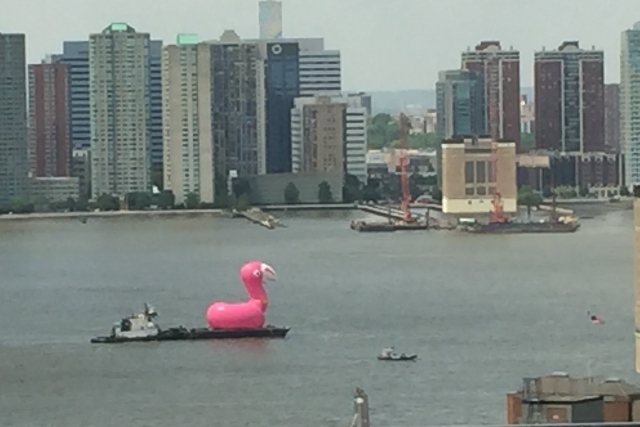 Seen from the West Village looking toward New Jersey. (Gothamist)

UPDATE 3:20 p.m.: We have confirmed that the flamingo is an advertising stunt by a beverage company.