Did the NYPD Act as Judi Giuliani's "Taxi"? 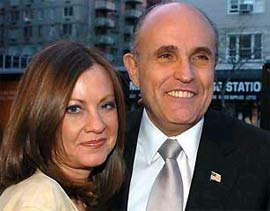 Even thought Rudy Giuliani's presidential campaign tries to insist that the story is old news and a hit job, the Rudy-NYPD security detail Travelgate situation keeps getting messier. Why? Because even if one agrees that a security detail for Giuliani while he was visiting his then-mistress (and now current wife) Judi Nathan in the Hamptons is a legitimate use of taxpayer money (even if it was randomly billed to various city agencies - which the City Comptroller does not condone), does that mean a security detail for Nathan alone is okay?

The Daily News digs up expenses that NYPD police officers incurred when they drove Nathan - who Giuliani did not marry until 2003 (a year after his divorce with Donna Hanover was finalized) - to Pennsylvania to visit her parents. And CBS 2 spoke to a source who says that Nathan would have the police chauffeur friends and family when she wasn't even there!

While Giuliani's press secretary was "angry" over citing an anonymous source, CBS 2 reports, "she did not deny the assertion that Nathan used her police detail to ferry around friends and family." NYPIRG's Gene Russianoff said, "The rules are clear, you can't use city resources for private reasons. And if you're using a city car, a police driven car to chauffeur around relatives, unless they're explicitly protected and their deemed to be the subject of potential security threats, it's just wrong." Mayor Bloomberg's girlfriend Diana Taylor, who does not have a security detail and uses the NYC Transit bus and subway system (when not in a Bloomberg limousine or jet), told the Daily News, "I don't have security in Bogota or Nairobi or Moscow when I travel there on business, why would I need security in the safest city in the world?" Oh, snap!

And during the Driving Mrs. Hevesi scandal, the use of NYPD detectives driving Police Commissioner Kelly's wife Veronica Kelly was mentioned. According to NYPD Confidential, detectives would be tasked with "picking Mrs. Kelly up on the Upper East Side when her car broke down; driving her to fundraising events or to the shelter where she volunteered; and taking her to and from airports for domestic and foreign flights."