Did SLA Commissioners Get Perks for Voting Paterson's Way? 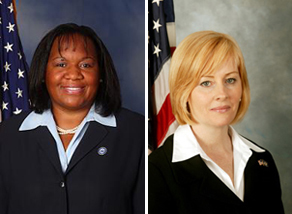 As the New York State inspector general looks into allegations of intimidation leveled by State Liquor Authority chairman Daniel Boyle against Governor Paterson's office, sources in the SLA tell the Post that the two other SLA commissioners were given the use of cars as a perk for voting to renew liquor licenses for the embattled Cipriani restaurant empire. The investigation was launched after Boyle told the Post that Carl Andrews, an aide to Paterson, pressured him (unsuccessfully) to vote for Cipriani's license renewal.

Now sources in the SLA say that Jeanique Greene (a former legislative aide to Paterson, pictured left) and fellow Commissioner Noreen Healey (pictured right) last month received "unlimited," around-the-clock use of state cars on orders from Paterson's office. "It's definitely a perk," one unnamed source says. Previously only Boyle, a former Syracuse police chief who makes $120,800, was authorized to have a 24/7 state car; the two other commissioners (who each earn $90,800 a year) could use pool cars occasionally, and only for official business.

The Post has also learned that one day after getting the new wheels, Greene and Healey "sprung a surprise resolution to strip Boyle—the sole board member to vote against the Ciprianis—of all powers previously delegated to him to conduct authority business. Instead, the resolution required approval of the full three-member board for any actions." Which may explain why Boyle didn't blab to the Post until last month, a full six months after Andrews allegedly tried to "intimidate" him. Of course, the real lesson here might be that David Kaplan, the beleaguered owner of Death and Co. in the East Village, should stop suing the SLA and instead take Andrews to lunch.