Did Police Eject a Man from Yankee Stadium for Trying to Use the Bathroom During "God Bless America"?

From the inbox: Baseball fan Brad Campeau-Laurion says a uniformed police officer (perhaps off-duty but working security for overtime) forcibly ejected him from the stadium last night during the Yankees-Red Sox game.

Why? He says all he did was try to go to the bathroom while "God Bless America" was played during the 7th inning stretch. His letter reads (plus some updates after the jump): 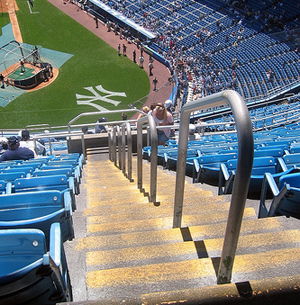 "I attempted to get up to use the restroom, rather urgently, during the 7th inning stretch as God Bless America was beginning. As I attempted to walk down the aisle and exit my section into the tunnel, I was stopped by a police officer. He informed me that I had to wait until the song was over. I responded that I had to use the restroom and that I did not care about God Bless America.

"As soon as the latter came out of my mouth, my right arm was twisted violently behind my back and I was informed that I was being escorted out of the stadium. A second officer then joined in and twisted my left arm, also in an excessively forceful manner, behind my back. I informed them they were violating my First Amendment rights and that I had done nothing wrong, with no response from them.

"I was sitting in the Tier Level, and of course this is the highest level of the stadium and I was escorted in this painful manner down the entire length of the stadium. About halfway down, I informed them that they were hurting me, repeated that I had done nothing wrong, and that I was not resisting nor talking back to them. One of them said something to the effect that if I continued to speak, he would find a way to hurt me more.

"When we reached the exit of the stadium, they confiscated my ticket and the first officer shoved me through the turnstiles, saying 'Get the hell out of my country if you don't like it.'

"Nowhere on the Yankee Stadium ticket policy nor on any posted sign does it say that forced patriotism is a required element to attend a baseball game. Nowhere in the laws of this country would that begin to be defensible.

"Furthermore, when the two officers returned to their section, Steve who was still in the stadium overhead one of the officers say 'We got to watch ourselves. One day we're really gonna get in trouble.' They were also spreading rumors with a fan with whom they were friendly that I had said 'This country sucks.'

"I do not believe in God, nor am in support of this country to a degree of patriotic fanaticism. The fact that I wanted to use the restroom instead of standing through God Bless America should not be grounds for a forcible ejection from a baseball game."

The man tells us he's left a message with no response from the Operations Office at Yankee Stadium. He's also contacted Norman Siegel, the ACLU, and filed a complaint with the NYPD Civilian Complaint Review Board. We're still working on getting a response/denial from Yankee stadium, but a regular attendee of Yankee games tells us, "This tip doesn't surprise me at all. Everyone has to stand, just like in school, and you'll get berated and harassed if you don't."

UPDATE: We just spoke to Brad, whose story is attracting a lot of attention. He has a few comments, based on your reactions:

1) I was not drunk. I had two beers about an hour apart and this was about an hour after my last one (hence, needed to pee). I have receipts to prove this, as I was using my credit card, and my friend who was with me as a witness.

2) Yes, I am Red Sox fan. I have lived in New York for over 8 years and I do not cheer loudly or wear blatant Red Sox attire at the games. In fact, I was dressed in business attire - dress shirt/pants/shoes.

3) I may have affected a little attitude, but nothing that warranted a violent response.

Last year, the NY Times looked at this confining policy. Apparently, post September 11, fans had complained that other spectators weren't singing or observing a moment of silence; spokesman Howard Rubenstein told the Times, "Mr. Steinbrenner wanted to do all games to remind the fans about how important it is to honor our nation, our service members, those that died on Sept. 11 and those fighting for our nation."

UPDATE, 8/28: The NYPD says it had cause to eject Campeau-Laruion, claiming he was "cursing, using inappropriate language and acting in a disorderly manner." But Campeau-Laruon denies it, "That's ridiculous. That's completely false."

#ejected
#god bless america
#thrown out
#yankee stadium
Do you know the scoop? Comment below or Send us a Tip