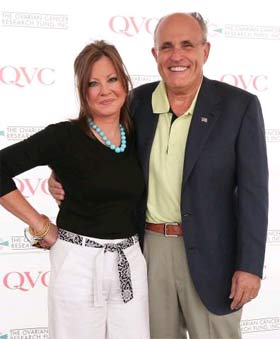 When Giuliani would travel outside the city, he would be accompanied by a police detail. And if he stayed overnight, the police would also need lodging and other expenses taken care of. Politico reporter Ben Smith writes, "It’s also impossible to know whether the purpose of all the Hamptons trips was to see Nathan," but the suggestion is strong that the trips were to see Nathan, who had an apartment in Southampton - where many of the trips were, per credit card bills. Or, as the Daily News puts it, "It has been known since 2000 that then-Mayor Giuliani used his official, taxpayer-funded NYPD detail to escort him to weekend getaways at Nathan's Southampton condo as early as 1999, well before his marriage to Donna Hanover dissolved the following spring" - it's just that Giuliani's people would refuse to answer questions about it.

A city auditor first noticed $34,000 in travel expenses billed to the NYC Loft Board, and then further investigating revealed almost $145,000 in "non-local travel" billed to travel different small agencies in 2000 and then $400,000 was found billed to the office of the Assigned Counsel Plan, which the Post explains is the office that "assigns lawyers to destitute criminal suspects." Thanks to the Freedom of Information Law, Smith obtained a 2002 letter from City Comptroller William Thompson to Mayor Bloomberg, which notes the strange travel expenses and how Giuliani's office wouldn't give him any answers.

When the topic came up during last night's debate, Giulani said, "I had 24-hour security for the eight years that I was mayor. And they took care of me, and they put in their records, and they handled them in the way they handled them. I had nothing to do with the handling of their records, and they were handled, as far as I know, perfectly appropriately." Mmm-hmm. At any rate, the Rudy and Judi Show continues!

Update: Now ABC News is reporting/reminding everyone that Judi Nathan had her own NYPD security detail while Giuliani was dating her. A source who used to work for Giuliani told ABC News, "She used the PD as her personal taxi service." Giuliani has been saying the Politico story is a hit job.