Metro New York ran a front page story this morning on photographer Andrew Piccone, a frequent contributor to The Awl whose first gallery show, “Faces of Occupy Wall Street,” opens tonight at the Frontrunner gallery in TriBeCa. Piccone was grateful for the attention for what may be the first Occupy Wall Street-related gallery opening in the city—but was surprised to find himself portrayed as an opportunist trying to profit off of OWS, with the free daily paper noting, "The portraits of some 26 protesters will be sold for $200 a print." And two questions have emerged as a result: did Metro unfairly set him up for the sake of controversy? And is it ever wrong for photographers to make money off their art, regardless on the subject matter?

In the cover story, Piccone is referred to as an amateur photographer trying to sell his OWS portraits for $200 a piece, even though he snapped his subjects from afar, leaving some Occupiers feeling violated. Piccone told us the story leaves out the real purpose and point of the exhibition:

I was excited to hear from Metro New York about covering the show, and it appears that they were looking more to create a controversy around it. I sort of stepped into it, and didn't necessarily get the real point of the show across that I had wanted: the pictures are to highlight the individuals that are making up the protest. I don't make a living off of my photography, and I've invested a significant amount of time, resources, thought, money and effort into bringing this whole thing into being. I didn't have the intention of this being a way to profit off of the movement, off of any individuals.

I found a lot of inspiration in the Occupy Wall Street movement and I'm very pleased that I'm able to get to share these works, and that people are coming to see them. The idea that something I've done can inspire someone else to get involved with the protest is pretty cool. And the last time I checked, Metro takes advertisements for covering the same stories that I'm covering, so they work for money—so I don't see how they can excuse themselves in that respect. 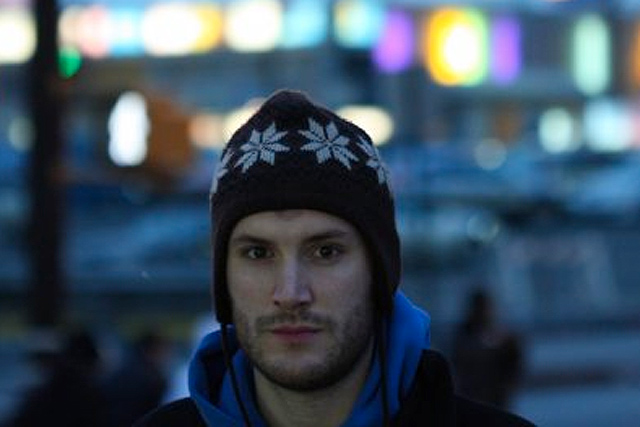 Piccone says that $200/photograph number was an arbitrary figure he came up with off the top of his head after being prompted by Metro:

I've invested some money into the gallery, and so I had thoughts of selling some if there's interest in selling them, just to be able to recoup my investment. I don't make a lot of money [in my day job] and I didn't have anyone underwriting this and so I hadn't considered how much I was selling them for. During the interview, [the reporter] asked, and I couldn't really think of a number so I said around $200 as kind of a rough estimate. And it seems like that was sort of used as a centerpiece of the entire thing.

Piccone admits his style, "candid portraiture," keeps him somewhat removed from his subjects—he likes shooting people in their natural state, and he feels he best contributes to the larger conversation about OWS through his photography. He defended himself against protesters who criticized him for not being more transparent with his work, and for not being more involved with OWS:

I feel like by being there and by shooting it, I am a part of it, just not in the same way as the people who are sleeping there and living there are. I'm interested by it, and have been affected by it enough to devote my time and effort and work into it. Just by saying that you're a part of the protest, does that make you part of the protest? Are you only a part of it if you eat, sleep, and breathe the protest? I can't answer that question. I'm definitely part of the 99%, and as a photographer I enjoy being able to communicate through images, and I want people to be able to see the images, to get their own message across, and so for me that's more effective than going and holding a sign, and I'm happy to kind of be able to have that role.

We spoke to fellow photographer Joe Holmes, who has his own portraiture project on Occupy Wall Street (you can see more pics here). He said he took up the project, visiting Zuccotti Park twenty times now, because he enjoys "the challenge of meeting a stranger and quickly collaborating to create an environmental portrait on the spot." He had a mixed reaction on the Metro story:

Not sure how I feel about the article—I certainly think that anyone who's shooting candid "portraits" of strangers without even stopping to ask or chat is running the risk of resentment. On the other hand, the OWS folks might be a bit naive if they think there aren't plenty of people making lots of money off the news and photos, whether art photographers or journalists. 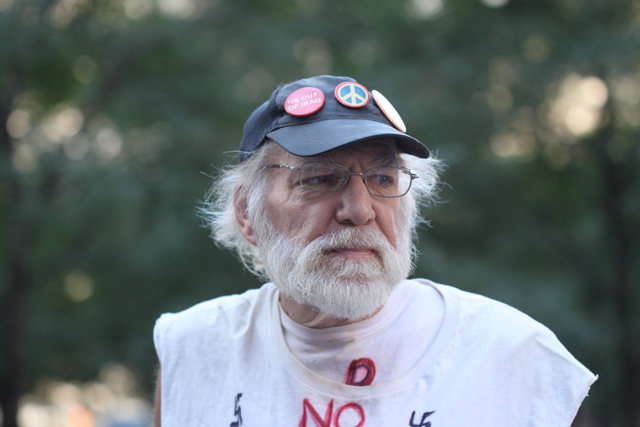 One of the portraits from Piccone's gallery (Andrew Piccone)

We contacted Metro for comment on the story, and editor-in-chief Tony Metcalf told us he's surprised Piccone wasn't cognizant of the direction the story was taking:

Mr Piccone invited us to his exhibition. Our reporter contacted him about it and he told us he was selling some of the images "starting at" $200. We sought reaction from OWS protestors and, in the interest of fairness, told Mr Piccone what they felt about him selling the pictures. He then said he would donate a proportion of the proceeds to the OWS movement.

Given all that, I'm slightly puzzled that he was unaware of the direction the story was taking. We stand by our story entirely.

Though he feels a bit disillusioned about the notoriety he got from the first big article on his work, Piccone is looking at the bright side: "I'm a bit frustrated but there's no such thing as bad press, and what can you do? I've gotten a lot of comments from people that have been saying if Metro is talking shit about you, then you're probably doing something right."